Back to Part 3: Traffic Flow and Junctions 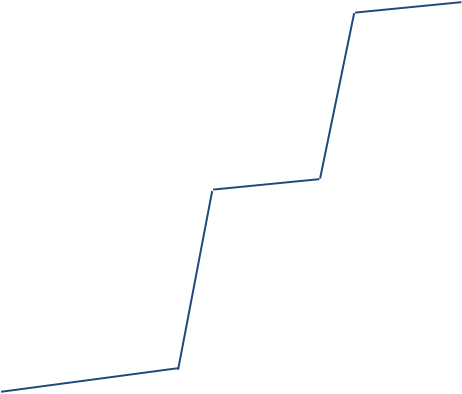 What needs to change, then?

Many of the things that need to change are in principle not necessarily that difficult or even different to what we’re currently doing. I was reading a popular textbook on traffic engineering recently, and saw a stepped diagram relating carriageway width to vehicle capacity. It looked like this, with carriageway width along the bottom, and saturation flow (passenger car units) along the left. You can see the capacity shoot up at the point where you go from one lane to two, for example.

I thought, why don’t we see, in these textbooks, this kind of graph in relation to planning for cycling? We know high levels of motor traffic to be an important factor in deterring most people from cycling. Why aren’t we parameterising this, and putting it into models that tell us what kinds of journeys are currently cycle-able for most people, and what we need to do in order to make the journeys people could make by bike (in terms of distance) cycle-able by the majority? In the graph below I’ve made up the numbers, but it wouldn’t be that hard to do some research to establish reasonable parameters, and to monitor changes and differences between areas. 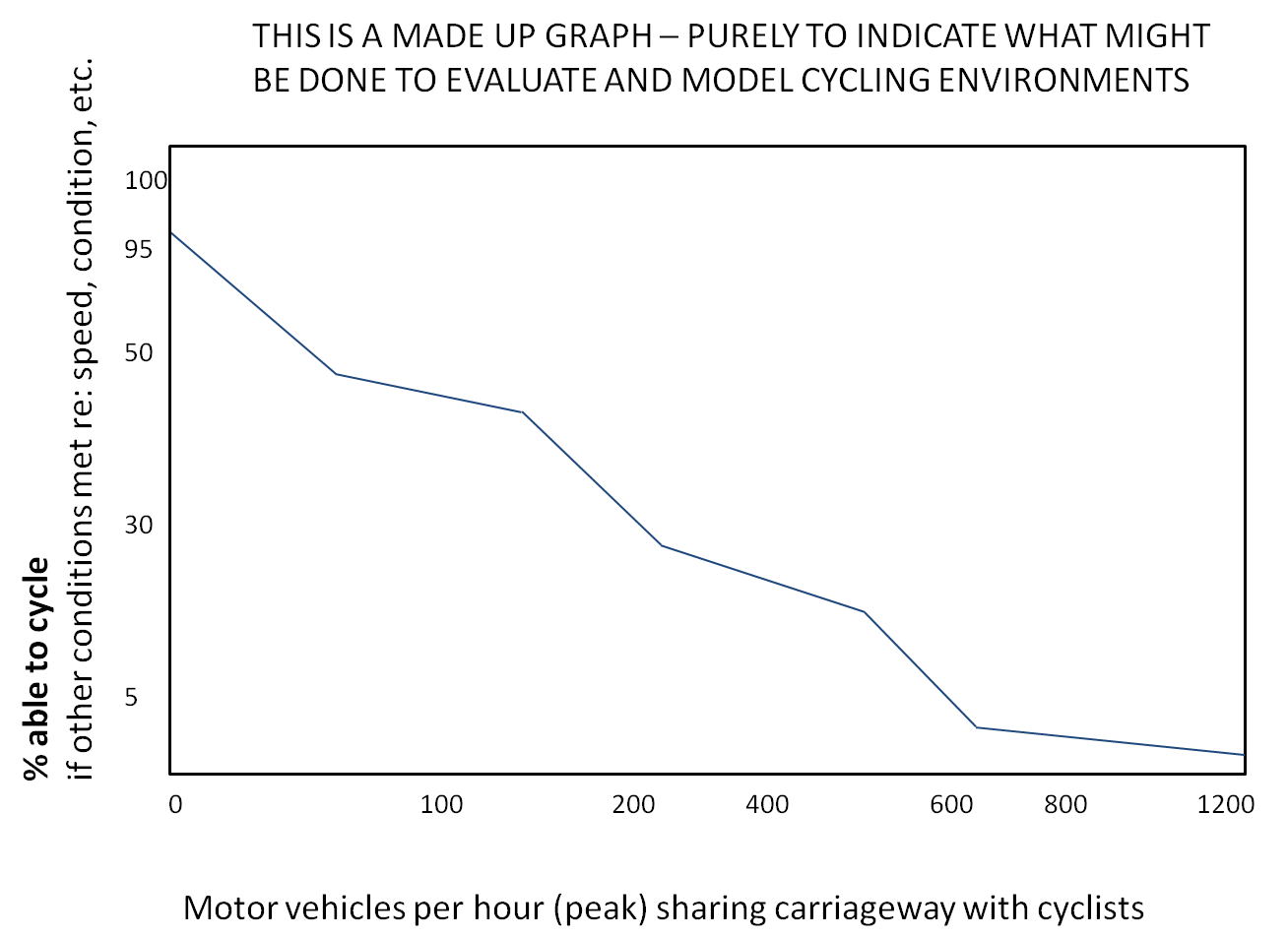 These kinds of parameters (for motor vehicle volume and other determinants of cycle-ability, such as motor vehicle speed) could be plugged into a network model of current trips, providing an estimate of the proportion of trips that are suitable for mass cycling, and allowing us to see which parts of a city suffer most from under-provision. (It might not be where we’d intuitively think). Depending on policy priorities, this could be used to prioritise improving school routes, for example, given that Cycle Infrastructure Design (LTN 2/08) says that children travelling to school will often need routes entirely separate from motor traffic. It could improve decision-making – perhaps there is a high-quality route that can be easily provided, but is it where people want to go now and will want to go in the future? Would it be better to focus on somewhere that might be more politically difficult, but which might yield much greater benefits? (and would the numbers help with that political difficulty?)

Importantly (in my view) we still don’t identify and prioritise a core network for cycling in different areas (a ‘cycle priority network’?), based on evidence about where most people want to go. Cycling needs connectivity, and the ability to accurately predict cycling, and intervene to increase it, will depend on looking broadly across the network, examining who goes where and why (and, looking at predicted land use changes, what journey patterns will be like in the future). We could then establish through research and modelling what level of service is needed to make this network cycle-able by the great majority of potential cyclists (85%? 95%?), and implement these measures as a priority. Bridleways could be an important part of the network in rural areas: they are legally cycle-able but, like main roads, often not so in practice, particularly for year-round utility cycling. (I hope this is the kind of thing that the Welsh Active Travel Bill will start doing). Having a clear definition and clear evidence of what mass cycling requires in practice (and the benefits that will stem from this) could help challenge the tendency in low-cycling countries to downgrade cycling provision when faced with competing priorities.

In conclusion: I would like to see both network models and small-scale traffic flow models incorporating a better understanding of how cyclists behave, and what level of changes are needed for more people to be able to cycle. Choices about cycling (and not-cycling) need to be understood as different from pedestrian or driver behaviour and preferences – this doesn’t mean they’re irrational, just that we haven’t yet successfully modelled them. In addressing this, it may be useful to experiment with different types of modelling; for example, system dynamics models can be used to explore the broader impacts of policy change (rather than looking at changes to specific parts of networks), while agent-based modelling can be used to explore social influence and social learning, both important for cycling as a minority mode that we seek to grow. Both intervening in traditional modelling, and exploring new perspectives are necessary, I think. Comments (either as responses to this post or emails) very welcome…