Details of some current/recent/planned projects. 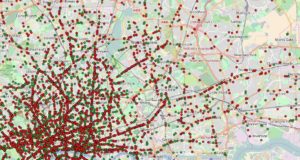 Injury and control sites in East London (from Stats19 and CYNEMON)

A recent project using a case-control method and spatial datasets to examine cycling injury risk in London led to a published, co-authored paper in Accident Analysis and Prevention (open access). A follow-on study is funded by the Road Safety Trust, and used a case-crossover method based on individual-level data (among other reasons, because there isn’t a national equivalent to TfL’s CYNEMON cycling flow model for London). Two papers are due out soon and a series of short videos based on key findings.

I’m part of the academic team behind the DfT-funded Propensity to Cycle Tool (pct.bike). The tool identifies cycling potential (currently main-mode commuter cycling) in England and Wales under different scenarios, at both area and route-level. As well as being involved in model development I’ve been leading on evidence reviews and user testing, leading to published papers on barriers to investing in cycling, and on how gender and age affect cycle infrastructure preferences. A new PCT contract involves the creation of a travel-to-school layer, and a ‘near market’ scenario as well as workshops/training.

New collaborations in Spain and Mexico are using my improving Spanish (I’ve been learning for 2 years and am now upper intermediate level). In Spain I’ve spoken in Madrid about cycling in London, and I’ve collaborated on a paper analysing Spanish road injury data.

Recently, I’ve been doing more work on walking as well as on cycling: including demographic correlates of pedestrian injury risk (using National Travel Survey secure data) and studying whether we see any changes in walking and/or cycling associated with active travel investment. A paper based on an ongoing longitudinal study in Outer London (the People and Places survey) has recently been published (open access) in Transportation Research A, and found increases in walking as well as cycling associated with streetscape interventions. A current project plan I’m working on is focused on street transformations improving conditions for walking and enabling ‘place-based’ uses like play. I’m also hoping to extend my spatial analysis of cycling injuries to conduct related analysis for walking in the future, and to do more work around risk that analyses levels of danger that vehicle users pose to pedestrians, in different contexts.

Another area of interest is economic impacts of active travel investment, and as part of a TfL working group I’ve been conducting new data analysis looking at business attitudes towards ‘Healthy Streets’. I continue to develop my work on active travel equity, with plans for a new collaborative project focusing on disabled cyclists, several papers published or in the peer review process on different aspects of equity, and a project focusing on experiences of new and more occasional cyclists. I’m also revisiting my qualitative roots and have recently written a paper on perceptions of different modes using a wealth of comment data gathered in the ongoing longitudinal study.

Other recent funded collaborative projects involve research on cycling near misses (funded by Creative Exchange and Blaze), which has led to three published papers as well as a first year project report, plus a CILT-funded project using modelling to explore bus-cycle interactions and delays, published in 2017.

Changing Commutes was funded by ESRC. It involved building an agent-based model to look at the uptake of cycle commuting, focusing on the impacts of social interactions and social norms in different contexts. Two papers that I led have been published: one re-analysing Census data and one re-analysing a combined qualitative dataset from three different projects.

I led the the ESRC funded Modelling on the Move project, with a range of collaborators – the site can be viewed here, with slides and audio from seminars.

For two years (2010-11) I led the ESRC Cycling Cultures project with Kat Jungnickel.

During Summer 2012 I worked on a project on Cycling Advocacy in London, doing interviews, ethnographic fieldwork, and online surveys. A journal article was published in the Journal of Transport Geography.