Return to Wick Road: #1 – this could be a game changer

This is one of a series of three posts that will deal with Hackney Council’s new proposals for Wick Road. Another will deal with the detail of the proposals (including problems that still need fixing – especially at junctions and crossings), and another with data on car ownership in Hackney and London. (E.g.: among Hackney adults aged <65, it’s normal for home owners to also own cars, but those living in council or privately rented housing are typically car free).

This post, though, is about the big picture on Wick Road and why it matters so much.

In a sentence: while TfL has been producing some real disappointments, Hackney Council has raised its game and is proposing protected space for cycling on a nasty B-road, where it’s sorely needed. Yes, I have caveats, concerns, and queries for the consultation response, but this is very good news for the borough.

I cycle along a short section of Wick Road every day I go into work. Back in 2015, some plans appeared, prompting me to write both a blog post and a consultation response.

The immediate prompt was the proposed removal of the short section of cycle path which helps me get safely across Wick Road when travelling N-S between Homerton and Central Hackney. I was shocked and surprised to see the Council planning to rip this out, leaving me and others mixing with heavy motor traffic instead. 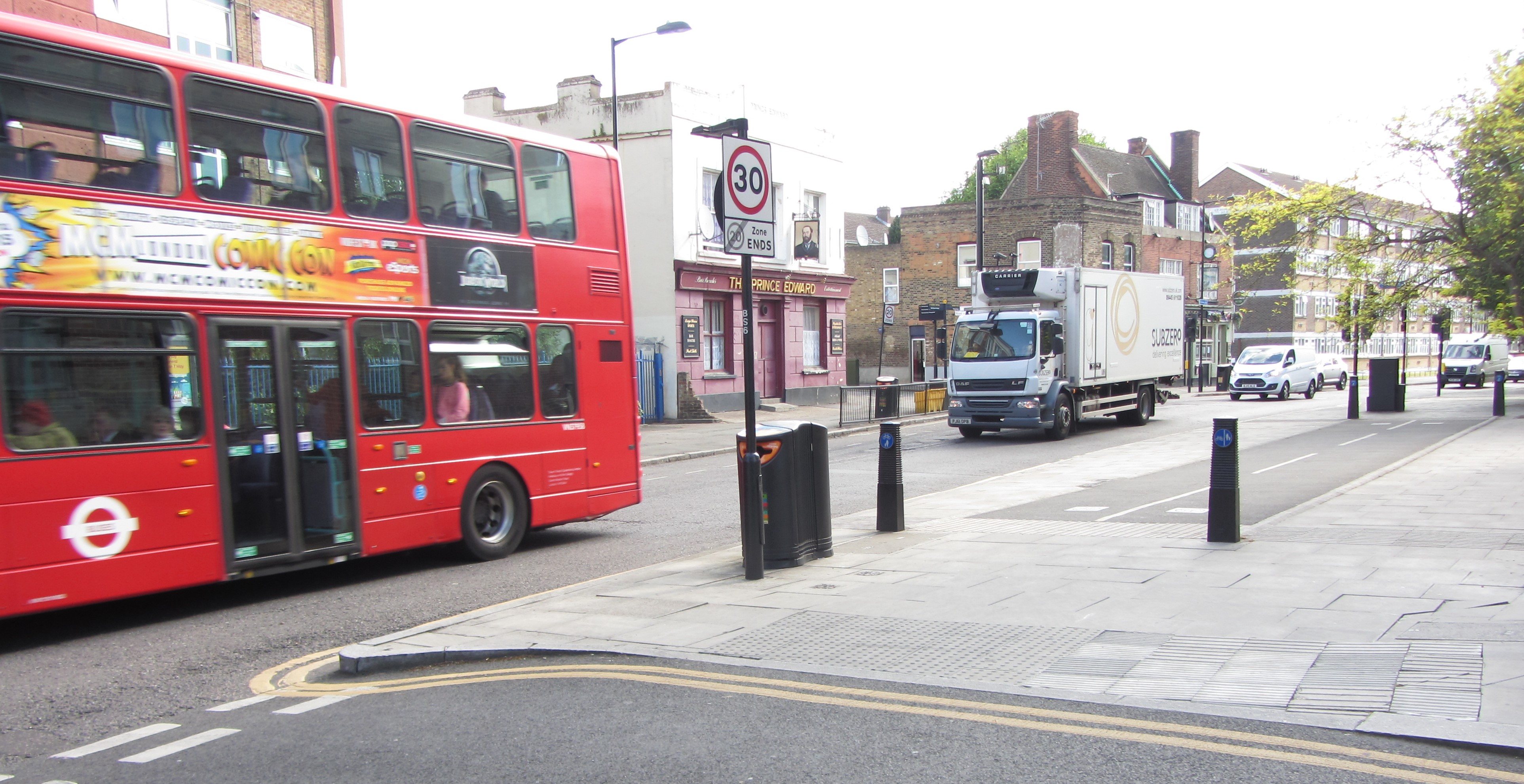 The current track along a short section of Wick Road.

But more broadly, I was concerned with a failure to prioritise cycling and walking in an area blighted by heavy motor traffic and terrible severance. Instead there seemed to be an apparent over-riding concern with introducing two-way motor traffic on Wick Road, and with protecting and even expanding footway car parking.

I wasn’t the only one upset. Although the Council never published any consultation results (and I have to say again there should be more data provided in this consultation, too), this FOI request revealed two-thirds of people responding opposed the scheme: of 316, 102 supported and 214 opposed.

I’m grateful to Hackney Council for listening to those of us who expressed concern about the original proposals. The new proposals acknowledge these concerns, stating:

We consulted on a design in 2015, and received a number of comments and suggestions. This design has taken many of those suggestions into account, including:
– Keeping the contraflow cycle link between Bradstock Road and Barnabas Road
– Better and safer off-road cycle routes
– Reducing the volume and impact of off-street and footway parking
– Addressing concerns with accidents (sic) and speeding
– Improving the walking environment

What level of improvement is this, compared to the previous plans?

For cycling, the proposed Eastbound and Westbound tracks along Wick Road mean it’s an awful lot better, and I support the scheme on those grounds – although with caveats (junctions either end remain bad and I’m unconvinced about the ‘shared space’ at bus stops). It’s exciting to think that in Autumn Hackney could be building a new protected cycle track along a busy road.

For public realm and pedestrian amenity, there is some improvement; although I’m disappointed to see informed crossings persisting in place of zebras. (If motorists are generally going to give way at these crossings, then why not give vulnerable pedestrians the additional security of a zebra? And if they’re not going to give way, surely we need zebras even more!)

However, even as we reduce levels of car use and ownership (see the draft Mayors Transport Strategy for proposed targets) some of London’s roads will continue to be prioritised for through motor traffic. If – as it seems – the Council have decided that Wick Road is such a road, then we need to concurrently prioritise safe provision for people walking and cycling along and across it, protecting them from risk, discomfort and severance.

The LSOAs (Lower Layer Super Output Areas, a Census unit) surrounding Wick Road are among the 20% most deprived in the country. Research – including data I’m analysing as part of a project on pedestrian injury risk – suggests low income pedestrians and those in deprived areas are at particularly high risk of being injured by motor vehicles. This is, I believe, linked to the hostile conditions often found in these areas, where motor traffic dominates despite low local car ownership. It’s a major equity issue.

Each year, Hackney consistently has more cyclist than pedestrian casualties. While many cycling injuries occur on busy A roads, we shouldn’t infer from this that other road types are safe. Current research I’m carrying out on cyclist injury risk suggests London’s B roads (like Wick Road) are no safer than its A roads (controlling for cycling levels).

If we can fix cycle safety and comfort here though, the benefits could be large. It’s a dense residential area, where major roads currently sever access to jobs, parkland, and shops. The image below highlights in dark blue the busier roads (estimated to have >2,000 motor vehicles per day, using a model created by colleagues from Imperial College) with Wick Road circled in red. You can see that anyone wanting to cycle East-West from the housing estates surrounding and East of Wick Road cannot avoid it or similarly busy roads (to the North, Homerton High Street is hostile and busy, as is one-way Cassland Road to the South – while the little estate roads don’t join up). 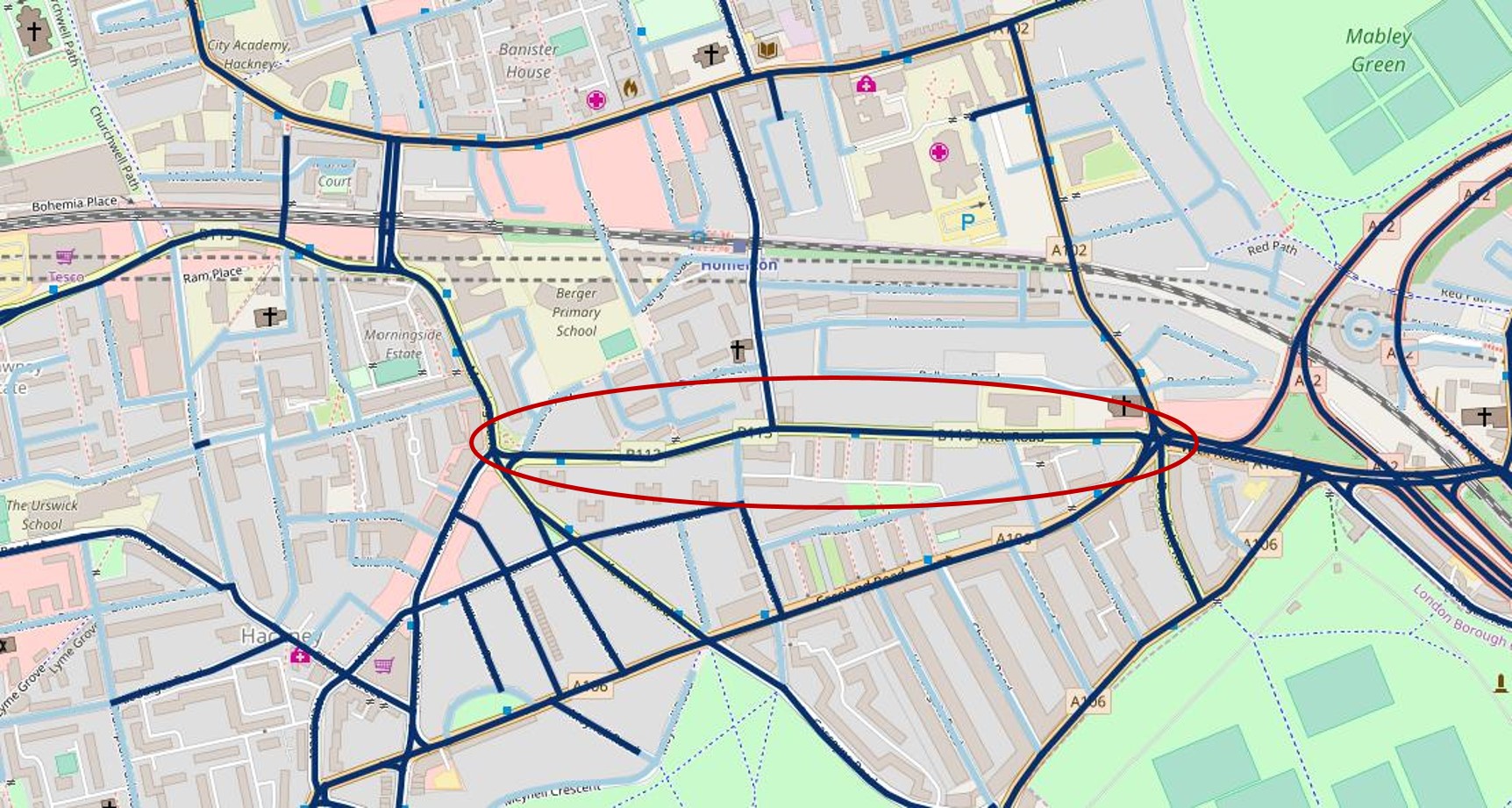 How much of a barrier is this? In other words, does this undoubted severance prevent lots of cycle trips that people might otherwise make?

Turns out we can now provide some answers, based on detailed cycling potential results from the Propensity to Cycle Tool (www.pct.bike). Since the last Wick Road consultation, the PCT team’s created a route network at the Lower Layer Super Output Area level, with greater granularity and accuracy than the previous MSOA-level version.

The PCT routes cyclists using the Cyclestreets ‘direct’ route – so it’s not necessarily where everyone’s currently cycling, but it gives an idea of key desire lines (where people might want to cycle, if it were facilitated). As with any tool it’s not perfect and needs to be interpreted with local knowledge, of course.

The image below shows what the PCT suggests for current (2011) levels of commuter cycling in the Wick Road area (top image) and for the PCT’s E-bike scenario (bottom image). The E-bike scenario is ambitious. It calculates what we’d see if English commuters become as likely as Dutch commuters to cycle trips of particular lengths and hilliness, and people have access to e-bikes for some longer and hillier trips (based on Dutch and Swiss survey data on e-bike use).

While the E-bike scenario may seem unrealistic for authorities languishing on 3% mode share, this isn’t the case in Hackney, which should be leading the country in cycling ambition. The scenario suggests Hackney’s commuter cycling levels could be nearer 40% than 15%. We could see even greater increases for non-commute trips (like trips to Well Street shops just West of Wick Road, and local schools): TfL’s Analysis of Cycling Potential, which covers all trip types, suggests 14% of potentially cycled trips are currently cycled in Hackney. 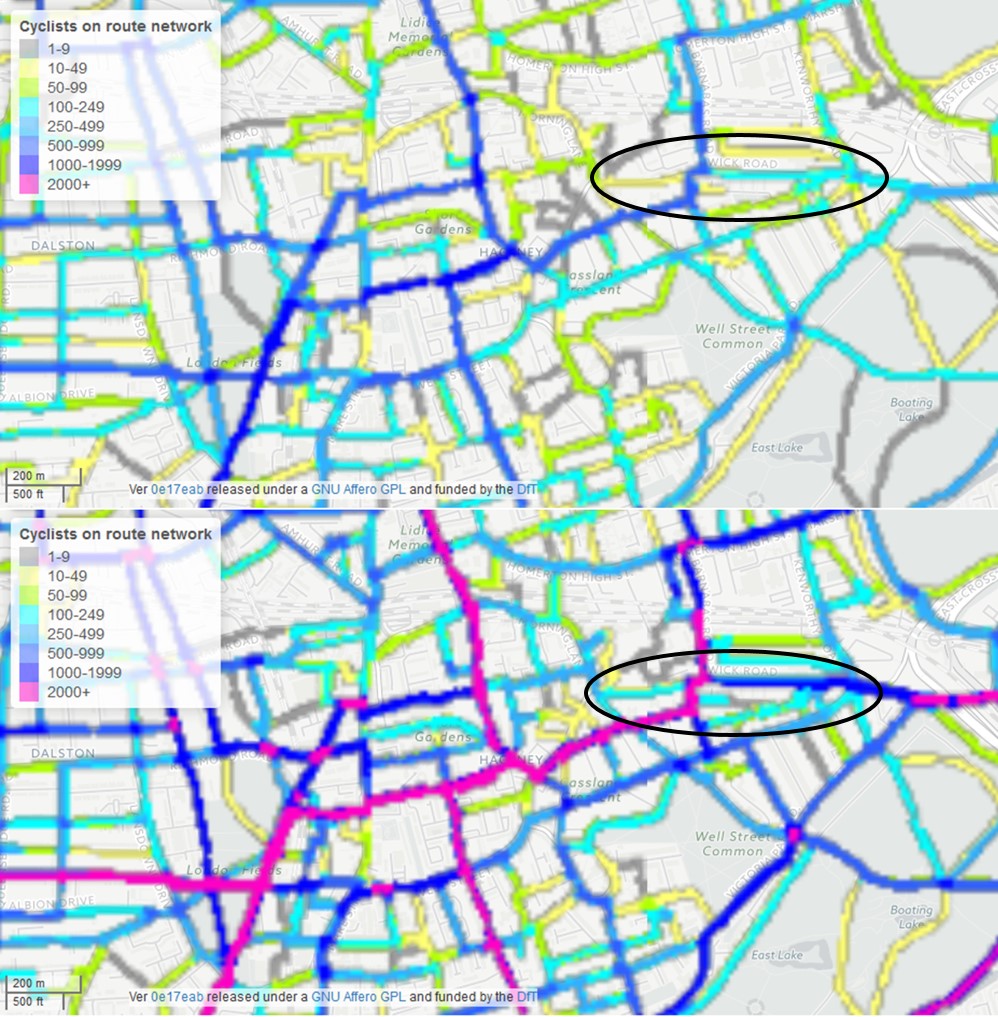 Firstly, the importance of the little cycle track is highlighted – that little wiggle you see (part way along Wick Road, joining Bradstock and Barnabas Roads) links up key North-South routes for both existing and potential cycle commuters.

But also, the potential of Wick Road to unlock higher cycling levels is clear.

The absolute numbers of (current/potential) cycle commuters cited in the image are underestimates if we assume the Wick Road scheme were in place, as the PCT bases routes on existing route restrictions. In other words, you’re only getting potential for people cycling Westbound along most of Wick Road, as that’s all they can legally do now. But with cycle tracks in both directions, levels would be higher as many people would use Wick Road both Eastbound and Westbound, particularly as nearby alternatives (e.g. Cassland Road, Homerton High Street) are so unpleasant.

Even so, we can see Wick Road, particularly East of Bradstock Road, should be a core part of Hackney’s commuter cycle network. It has potential both for substantial proportional increases compared to the current situation, and to achieve very high absolute levels of cycling. By contrast some other parts of the local network (with likely higher current route quality) are currently closer to their E-bike potential.

I’d also point out that West of Bradstock Road would be an important local connection for trips to Well Street, with a range of shops and a recently relaunched market. (This is a limitation of the PCT, in that we’re only looking at commuting – but other trip purposes are at least as important). Which makes it frustrating to say the least that currently the plans will keep the ban on cycling Westbound along Well Street and the ban on crossing Eastbound to Wick Road! (More on this in future posts).

Without reducing motor traffic to very low levels, the only way we are likely to go any way towards realising the cycling potential of Wick Road is to create separated space for cycling both Eastbound and Westbound. I fully support the principle of providing a safe, protected East-West corridor for cycling in an area blighted by severance and desperately in need of safe and comfortable cycling connections.

6 Responses to Return to Wick Road: #1 – this could be a game changer