Part 1: Where is Cycling in Transport Modelling?

Large scale modelling of transport networks is rooted in a tradition that focuses on vehicular movement; originally many such models focused only on car trips, with a ‘mode choice’ element coming later. At a micro level, for example in terms of junction modelling, a key aim has been to get as many motor vehicles as possible through the junction, hence in the UK the multiplying of motor traffic lanes at junctions and the related disappearance of cycle lanes there.

I have been asking around about how transport models deal with cycling, to get a picture of where we’re at and what we want models for – rather than just including cycling in models for the sake of it, I was usefully reminded that we needed to ask what the purpose would be. Some people I’ve spoken to don’t think models should deal with cycling. When cycling rates are very low, any change can be drowned out in statistical noise. And cycling is locally variable. One person told me ‘I am suspicious of cycling modelling because propensity to cycle depends on so many local conditions.’

This reluctance to model cycling is understandable. The age of transport modelling is also the age of cycling’s decline. 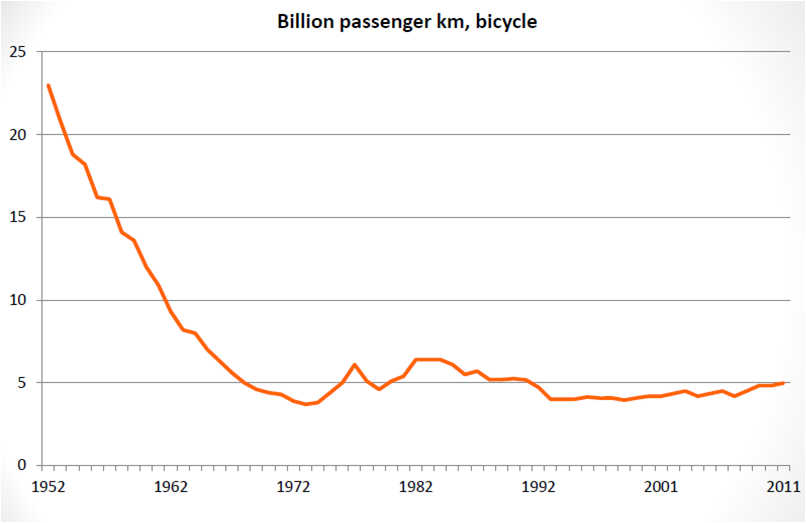 And with cycling low and/or declining in many places, even when promoting cycling became part of transport policy, the data and techniques needed to deal with it in modelling travel behaviour and traffic flow have remained underdeveloped. However, given the substantial yet still very localised rises in cycle commuting in some urban areas, alongside some evidence (albeit contested) that ‘Peak Car’ might be on the horizon, the need for models that help us understand cycling is growing urgent. Leaving out cycling risks keeping the emphasis on cars, by not exploring how we can develop models that can deal with cycling’s ‘local’ factors (which, I think, do also apply with respect to other modes, in different ways).

Part of the hesitation over modelling cycling seems to stem from a feeling that cycling has some kind of an irrational or at least subjective element absent from other modes (except perhaps walking). This interests me as a sociologist. What we define as ‘rational’ and ‘irrational’ is often a good guide to what is seen as normal and privileged, I think. I’ve written a paper – currently under peer review – looking at the concept of ‘utility cycling’ as partly an attempt to make cycling respectable as a rational mode choice. Yet this rationality is potentially illusory: the fact that we can define car trips as ‘rational’ is somewhat strange given the focus of so much car advertising, which aims at generating purchases and trips that stem from the heart, not the head. (Leaving aside the collective irrationality of mass car travel).

Many modellers are in fact sceptical of the assumption that travel behaviour is rational, and one session at the practitioner conference Modelling World 2012 was themed on this topic. There are two issues. Firstly, equations involving a range of variables may predict driving behaviour, but that does not necessarily mean the correct causes of this behaviour have been identified, merely that behaviour has been simulated using the chosen variables. Secondly, even if we have got the variables right for now, what happens if tastes, preferences, habits, and so on change? What happens if the future does not (or given environmental pressures, cannot) replicate the past? What if future people are or must be different to ourselves? There is evidence that in London at least, young people are less interested in the car than in the past. They want their Oyster card and their smart phone, but a car just seems like something Mum and Dad wanted.

So I would be sceptical of the idea that cycling is uniquely cultural, irrational, subjective and so on (choose your own adjective, with positive or negative connotations, depending on your discipline and outlook…) It appears so, because models have been developed based around the idea that car travel (and to a lesser extent public transport) represents a rational choice, leading to a neglect of data and techniques that could accommodate cycling. However, it’s true that cycling implies the need at least to extend modelled rationality as it currently exists. Cyclists often don’t choose the quickest route (assuming they know what it is!), as it may be unpleasant and/or unsafe. Such calculations are not assumed to enter the brain of the car traveller, who has been shielded from thinking about the risk they run (or to which they expose others), and who is more alienated from the surrounding environment than is the cyclist. But decisions about whether and where to cycle are not inherently un-modellable; they just pose different questions to the ones we’ve been answering.

3 Responses to Part 1: Where is Cycling in Transport Modelling?