It’s been a long time coming…

But at least in London, I feel there are some very positive signs of change for cycling.

In my role as chair of LCC’s Policy Forum, I’m organising a seminar series. The launch event took place this week, with London’s Cycling Commissioner Andrew Gilligan speaking about the new Vision for Cycling. There’s been a lot of analysis of the document – and of Gilligan’s speech – and I’m not going to add to this here. Instead I wanted to make a few more general points about where we find ourselves. 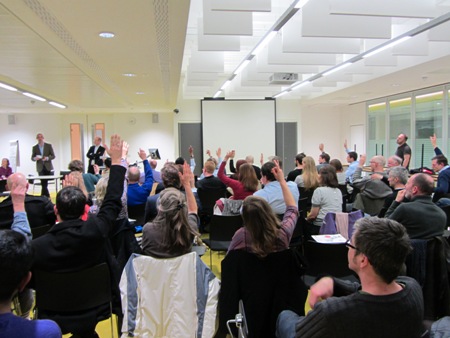 1. There’s an impressive amount of goodwill in London, despite past disappointments. Hope for change is partly founded on evidence that – despite what’s widely agreed to be often very problematic cycling conditions – people want to cycle: where cycling is easiest (both in terms of intrastructure, journey types, and types of people) it’s risen substantially. Also important is the fall in motor traffic in London and the modal shift away from the car towards (predominantly) public transport modes. Two Wheels Good has an interesting post on the cultural shift that’s been accompanying these transport trends, while Judy Green et al’s take is here.

2. As Mark Ames has noted, up to now the take-up of cycling in London has tended to be ‘for choice’ (i.e, people who could afford public transport as the major alternative to cycling in Inner London, where take-up is greatest). Given London’s perenially over-heated property market, poverty in London is increasingly moving to Outer London (and with ‘social cleansing‘ via benefit caps and bedroom tax, potentially outside London altogether). The fear for those of us concerned about equity and social justice is of a relatively cycle-and-walk friendly inner city, peopled by the relatively well-off, surrounding by cycling-hostile outer suburbs where the poor either need to spend large amounts of their low salaries on maintaining a car, or rely on a public transport service inferior to that enjoyed by the wealthier inner city residents.

3. The unequal take-up of cycling in London is problematic. However, it has also been a catalyst for change. This has worked in a number of ways, including:
(a) people taking up cycling have also tended to use social media in various ways, such as blogging, which has become influential (there aren’t many female bike bloggers, it has to be said, particularly in London – this could itself merit some discussion…)
(b) people who are unused to being discriminated against in their everyday lives are often viscerally shocked by the treatment they receive on the roads as cyclists as compared to the treatment they receive at work as respected professionals, expressed most cogently here in a post by the Cycling Silk back in 2011:

When I put on a wig and a silk gown, I am a member of The Establishment and enjoy the respect, privileges and (I have no doubt) full protection of the law should I require it. In contrast when I get on my bicycle, I step outside The Establishment.

(c) the sheer volume and visibility of people cycling in to a particular point (Central London workplaces) at a specific time (commuting) has itself a major policy impact, whether it is seen literally on the streets or made visible when blogs like Cyclists in the City reveal the statistics.
There is an ongoing tension between who’s taking up cycling and the desire on the part of many advocates to speak for the people who aren’t taking up cycling. To get to 5% mode share, we don’t just need more Inner London cycle commuters – we need Outer London mums to think about cycling to their local workplace and/or town centre shops. Maybe with their kids. This needs a major transformation in cycling conditions, which is why the proposal in the Vision for ‘mini-Hollands’ in Outer London town centres is particularly welcome.

4. For me, the most profound aspect of the shift that’s taking place in London is around responsibility, and how that is located between the state and the invididual. I have written about this at greater length elsewhere, but put briefly, my argument is that in the post-war period, while state responsibility for transport policy grew substantially, cycling became invisible within this. Cycling was simply not seen as the domain of the state (as with motorway building or public transport policy), but rather located within the private sphere, seen increasingly as a leisure and/or childhood activity. In 1992, the British Medical Association published the groundbreaking ‘Cycling: Towards Health and Safety’, which inaugurated a new era where cycling for transport was seen as something that should be promoted. However, it remained conceptualised as an individual lifestyle choice, albeit now as ‘healthy transport’ or ‘sustainable transport’. It wasn’t seen as a major strategic investment programme within national transport policy-making. Hence, the ‘risk’ associated with cycling remained individualised, with ongoing pressure on cyclists to ‘protect themselves’ through looking like a cross between Darth Vader and a Christmas Tree.

5. What we’re seeing now in London is a growing recognition that cycling (and cycling safety) are fundamentally the responsibility of the state, not something for which individuals bear primary responsibility. This opens a lot of doors. We can start thinking seriously about a cycling system or service (as we do the Tube system and the bus service) and evaluating it. Who can access it? Who can’t? What level of service do we need? What proportion of children in each borough are able to access protected or extremely quiet (yet still adequately direct and socially safe) routes to school? We don’t have all the tools for this at the moment, as I argued in my earlier blogposts on cycling and transport modelling. One thing I’d personally like to see in London is a cohort study containing a range of people who are interested in trying cycling (i.e. the ‘Interested but Concerned’ in Roger Geller’s classification of potential cyclists). Participants could be, for example, recruited at the RideLondon festival (which will no doubt attract families keen to cycle on roads temporarily shut to motor traffic) and the study could track them over time, seeing if they try cycling, what they think about cycling conditions, why they stop and what makes them take it up again. I’d also like to see more of the existing data about cycling in London made available so that academics and advocates can chew over it, debate the details of the trends, and argue over what can be done.

6. What about the rest of the country? What difference will change in London make? I was chatting to a colleague who lives outside London yesterday, and I expressed my worry that even if London succeeds in its cycling revolution, it might be seen by those outside London as part of what makes London weird (like our generally very good public transport, and our strange tendency to get rid of our cars). (In the Cycling Cultures project, it struck me as amazing how quickly places can gain (and lose) reputations for having long-standing cycling cultures, which other places can never hope to emulate!) My colleague disagreed with my pessimism. He said that given London’s reputation as being a scary place to cycle (something I can personally corroborate: I’ve been told many times ‘You must be brave to cycle in London’, sometimes by people who regularly ride on rural roads with 60mph speed limits), if London cracks it, advocates in the rest of the country will be able to say ‘Look, even London can do it’.

4 Responses to It’s been a long time coming…