On social movements, identity and equity

On Tuesday, I attended Mark Ames’ excellent and packed out Street Talk on Cycling Towards an Equal City. I learnt a lot from the talk itself and from the variety of contributions: I think it tells us something that the most popular Street Talks tend to be those dealing with cycling. Mark’s focus was on cycling and equity, making the point that ‘the exclusion of minorities in the built environment is not acceptable any more’. He used the examples of a child with asthma, and an older person with balance problems, to help think about how we build cycling environments where those people are able to participate. Places where people are invited to cycle, rather than having to endure it.

During his presentation, Mark briefly talked about what cyclists could learn from the gay movement in terms of how activists can be successful in changing policy and perceptions. In the discussion, one person criticised this analogy, pointing out that cyclists are trying to get more people cycling, whereas gay people (outside the fevered imaginations of the prejudiced and repressed) aren’t trying to encourage more people to become gay. In response someone else suggested that women and work would be a better analogy. 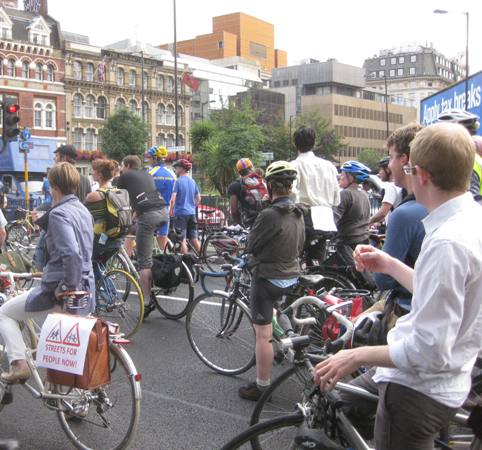 I like analogies. Probably it’s being a sociologist. And I think a variety of analogies (including those two just mentioned) can be helpful. They don’t have to imply a general equivalence between two groups, problems or situations. They just have to highlight some characteristics or issues that people can learn from, in a different yet somehow comparable situation. If we use another group’s experiences as somehow instructive for cycling advocacy, it doesn’t need to imply, for example, that cyclists are treated ‘as badly’ as that other group. (I also think that there are plenty of things that cycling advocates can learn from the success of the roads lobby in the immediate post-war period, after decades of relative failure).

So, I was pondering cycling, identities, and social movements on my way to work, and thought that it was worth exploring a little more. I heard Aurora Trujillo present a fascinating paper a few years ago on ‘Cyclists as an Oppressed Group’. Aurora talked about how people assume that social identities are generally ascribed, whereas being a cyclist is very different because it’s chosen; but, she said, it’s not as simple as that. In a sense, all social movements seek to ‘convert’ others, for example by persuading them to see a particular aspect of their lives as important (this might be in terms of identity, or in terms of social justice and equity) and worth doing something about. This came up in my work on Londoners on Bikes, where people spoke of how they had only recently learnt to see cycling as part of their identity.

You might imagine as an analogy a society with gender equality. In this world being a woman would not seem that important – ok (unless we’re going sci-fi or cyborg) some women would give birth, while no men would, but for the vast majority of life events and experiences (involvement in childcare, earning power, social status, and so on) gender wouldn’t make any difference. Then imagine you moved from Gender Equal World to the UK; being a woman might well start to seem like something that mattered; a far more important part of who you are. You’d pick up on things that seemed weird or unjust; perhaps you’d wonder why you saw so few women in positions of power, or why people didn’t seem to pay so much attention to your ideas any more. This kind of experience was described by Londoners on Bikes activists who’d moved from Denmark or the Netherlands to London, and came to learn (a) that they were ‘cyclists’ and (b) that this mattered – others would treat them less well because of this.

Even identities that seem obvious and natural, like gender, are socially constructed and their salience will depend on whether (and how) they matter in terms of social structure. Academics writing on gay identities, such as Michel Foucault, have explored the extent to which ‘gay’ is a historically and culturally specific identity. Other ways of understanding sexuality might focus on defining groups by reference to practices rather than identities, for example, ‘men who have sex with men’. There’s also been a lot of really interesting work on the politics of ‘racial’ or ethnic identities: for example, A.Sivanandan’s use of the concept ‘Black’ to stress the commonalities that people facing racial oppression experience. Sivanandan wasn’t referring to an assumed biological or cultural similarity; instead he was talking about (anti-racist) politics. And any kind of categorisation, whatever basis it claims, must also make political claims about what matters and what doesn’t matter. References to ‘active travel’ or ‘sustainable travel’ call on different discourses and imply different arguments, different priorities, exclusions and agendas.

I would argue that cyclists, advocates and practitioners might learn from other advocacy groups and movements, even where circumstances are very different. One example might be to think about the implications of what sociologists call the ‘unmarked category’. A dominant or privileged group is often seen as the ‘unmarked category’, meaning that the group is normalised; no one enquiries into it, to an extent it is invisible, while the less privileged ‘marked categories’ are always visible, always subject to challenge and often defined as a ‘cultural problem’. No one talks about the ‘ethnic majority’. They don’t ask ‘what is it about the culture of white middle class men that makes them abuse their wives’, they don’t write headlines about a ‘heterosexual abuse scandal’. This tends to mean that the marginalised are defined only by the category of their marginalisation; this is cast as a threat to the invisible dominant group. The dominant group for its part tends to be defined by its members’ other attributes (as parents, for example, who might object to their children hearing about gay relationships at school – in this discourse ‘parents’ are implicitly cast as heterosexual parents, while gay parents become invisible).

What does this mean for cyclists, who have so often complained of invisibility within policy documents that seem to assume that people are motorised? (‘Sorry mate, I didn’t see you when I was writing the Lane Rental Schemes Guidance’, perhaps?) The experience of other marginalised groups of being a ‘marked category’ suggests that even when cycling becomes visible in policy terms, this can be problematic. Where cyclists are named as a group to be considered, often policy documents also refer to shadowy groups such as ‘Other Road Users’ or ‘General Traffic’. This often seems to be shorthand for car drivers and passengers; to take one randomly chosen example:

‘The encroachment of the worksites onto areas of public highway on the surface will affect a number of road users, including pedestrians, buses, taxis, cyclists, and general traffic.’ (page 86 of TfL’s Victoria Station Upgrade Supplementary Environmental Statement Technical Appendix A – Traffic and Transport, available here – large file).

From the DfT’s generally interesting (if depressing) report on ‘Safety, Cycling and Sharing the Road: Qualitative Research with Cyclists and Other Road Users’ (2010, p. 14), my emphasis:

Each [Other Road User] workshop was recruited to include a diversity of different road users in the local area. Everyone was minimally a car driver, but groups also included drivers of taxis, vans, heavy goods vehicles (HGVs), coaches and, in one instance, a fire engine driver. A few motorcyclists were also included. ORU participants were generally non-cyclists or, in a few cases, very infrequent cyclists.

Even where cycling (and other modes) are also named, the use of general categories to mean (or prioritise) car travellers implies that the latter represent the norm, whereas the others are special cases. Cyclists may be recognised and tolerated, but only if they don’t unnecessarily inconvenience General Traffic. Calling car traffic ‘General Traffic’ is an example of an ‘unmarked category’; we might also think of ‘parking’ meaning ‘car parking’, never ‘cycle parking’. From the National Planning Policy Framework (2012:11):

Local authorities should seek to improve the quality of parking in town centres so that it is convenient, safe and secure, including appropriate provision for motorcycles.

Changing the language to be more honest throughout about which groups we are talking about (rather than only naming ‘cyclists’ and other non-car users) might help open up a debate about what forms of travel should be prioritised by infrastructural and other changes. It might even even de-normalise the car a little, open car travel up more to question.

Interestingly, in London it’s not always the car user that is the ‘unmarked category’. Public transport in London has historically been much more comprehensive and better funded than in the rest of the UK; often the assumption is that people will be travelling by public transport, not by car (compare the ‘how to get there’ pages for visitor attractions in London to those outside for example). Public transport is not seen as residual, but as a valued perk: as part of their reward package, TfL staff get ‘Free travel for you and a nominated partner/family member on the Transport for London network‘. No doubt there was a time when the ‘partner benefit’ was far more restricted, and many people (including unmarried heterosexuals) can thank the gay movement for the now generally more flexible interpretation of such benefits by TfL and others.

However, the reward is restricted in another way: it doesn’t include free use of the Boris bikes (cycling as public transport) for staff and nominees. Is this also an equity issue? Shouldn’t the assumption be that free use of public transport extends to bicycles as well as bus, Tube and train? Providing this benefit for TfL staff might have useful knock-on effects for cycling, helping to normalise it as a mode among more of the people who help to plan for it, as has been done for other forms of public transport.