Designing Well for Both Walking and Cycling 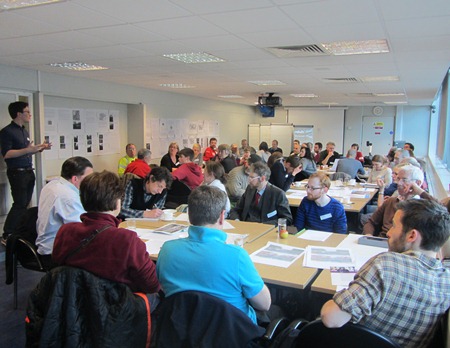 A short post about last night’s workshop, a London Cycling Campaign/Living Streets joint event. This also formed part of the LCC Policy Forum seminar series, which I run – we’ve had roughly one a month since I started it going a year ago. (Living Streets and LCC have both just launched important campaigns focused on the London local elections).

Some of the group discussions.

There were sixty people there, with six expert facilitors – Brian Deegan, Bruce McVean, Caroline Russell, Esther Kurland, John Dales, Mark Strong. Thanks to all of them for their excellent work, to people who helped with directions and room arrangements (Ben, Ross and Charles) – and to Tom Platt from Living Streets who co-organised and whose idea it was. The range of imagination and expertise gathered in the room made me feel a little bit like a seventeenth century salon hostess (albeit with less poetry and more kerb talk). One early comment that made me nod enthusiastically was that we need to create streets that encourage kindness – which (a) brilliantly set a higher bar than risk reduction (though that’s also very important) and (b) nicely set the scene for some ambitious yet practical discussion. Everything from the broader concepts (from Link and Place to separation and unbundled networks) to the detail of bus stop bypasses.

The first workshop session was me asking people in groups to think ‘What would a Perfect Walking and Cycling Environment be like?’ The idea behind this was to get people thinking positively, about ideal futures. We always have to compromise and we’re all – on foot, or on bikes – used to things being well below par. So it’s very easy to get fixated on small apparent ‘quick wins’, which can be very important in specific cases, but don’t necessarily help us get our vision across. Thinking positively about what we want can help set that bar high – and help us be clear about when and how provision for other uses and modes is going to have to be compromised, if things are going to be really excellent for cycling and walking.

Here’s three of the groups‘ notes on the question to give a flavour of some of the ideas discussed.

The second workshop session involved the small groups discussing key principles in relation to specific schemes – Bristol Clarence Road, Cambridge Hills Road, Manchester Oxford Road and three in London – Leonard Circus, Enfield Town Centre, and Kings Cross. A very diverse group of places, schemes and contexts! I have notes from all these discussions but I think it will make most sense to type them out and upload them alongside pictures/drawings of the schemes involved. I hope to do this by early May.

The really exciting thing about the event was seeing people learning from each other – in relation to specific schemes, but more broadly, about how we need to think and plan to do well both for cycling and for walking. Forward to people-safe streets – or, maybe, thinking about the point made above, to people-generous streets. Streets that don’t kill; and more, streets that are positively friendly and welcoming. What a prize that would be.