‘Although more research is needed, it is important not to wait for this, and we can still act to ensure the preferences and needs of under-represented groups are foregrounded in policy and planning.’

But when it comes to road safety, near miss research is definitely something we need to do more of. Right now, we seem a long way from taking near misses seriously. We seem to be struggling to act even when people are dying. This morning on the radio I heard a story of a ‘shocking’, ‘most sickening’ crime. This referred to a man having stolen a purse from an 84-year-old woman who had been run over by a lorry and left dying. The story illustrated the extent to which death on the roads has become normalised. That’s almost expected: an accident, certainly wouldn’t make the national news. Violating the property of the recently dead is taboo, but we are apparently unable to prevent their violent death in the first place.

This wasn’t meant to become a rant, although it is hard to avoid getting angry when critics of safer streets express horror at threatened ‘economic disbenefits of £200 million’ while death is taken for granted. (These disbenefits are largely comprised of summing lots of possibly slightly longer trips for motorists over a thirty-year period. Not something that horrifies me, personally, as much as a twenty-five year old woman being killed by an HGV last night – but perhaps I’m biased).

Rather, my point is that reactive is not enough. Acting when one, or two, or four people die is not enough. We need immediate action to stop further loss of life, and research can help. Specifically, looking at where near misses occur can help identify and measure ‘early warnings’ before anyone is killed or seriously hurt. (I think it’s also very important to look at near miss type incidents to identify situations that negatively impact the cycling experience without being lethal, but given where we are, I guess we’d better start with preventing death and serious injury).

My suggestion is that local authorities first look at several datasets that can provide information on cycling near misses in their area (some of the data will also be useful for pinpointing problem locations for pedestrians, either because of conflict with cyclists, or with motorists). I can soon make local mapped data available from the Near Miss Project; Collideoscope may have further data, and perhaps the CTC might provide information on locations where bad driving has been reported through their Road Justice project. In London, there’s also Roadsafe. 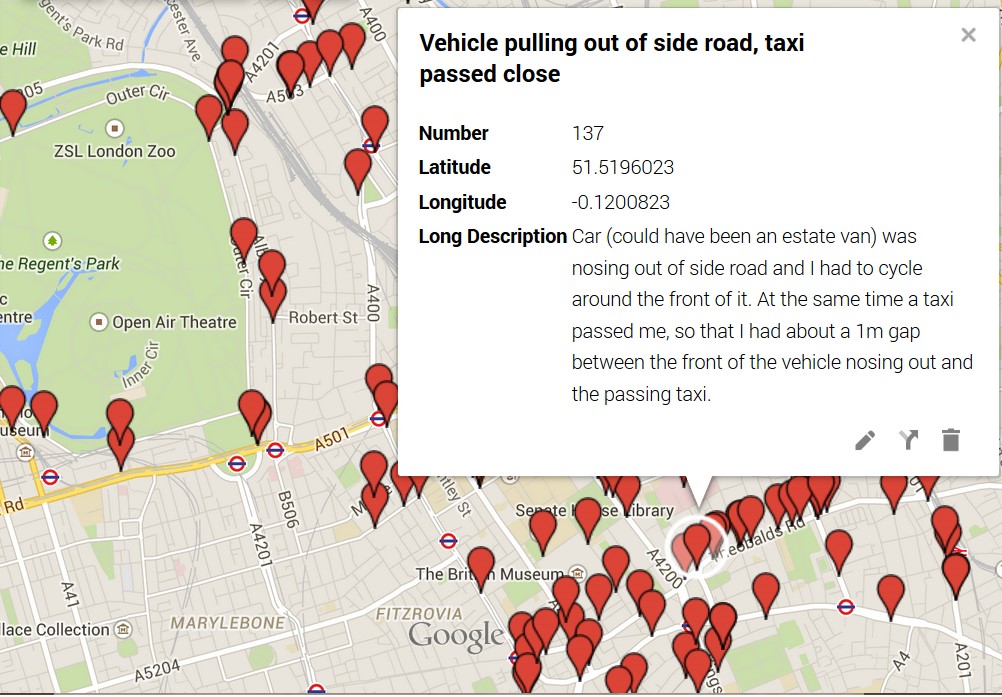 An initial go at mapping Near Miss Project incident locations in one borough.

Where a near miss or similar incident might incidate an infrastructural problem – for example a pinch point where cyclists are driven at, or a junction where near left hooks are reported – the authority should send people out, at rush hour, to observe and record any systematic threats to vulnerable road users. This can be done in a pretty low-tech way, but will then provide numbers of incidents that can be used to derive a rating of how problematic the location is. (This can be complemented by the use of new audit tools such as TfL’s Junction Assessment Tool).

Optimistically, I would like to believe that new data and new tools might play a small part in helping us do better at preventing deaths. I take inspiration from Jan Gehl’s work counting pedestrian activity and mapping pedestrian desire lines, which has done so much to help create more pedestrian-friendly public spaces.

8 Responses to More research is needed