So in previous posts I wrote about why Hackney Council’s new Wick Road scheme – proposing cycle tracks along a busy B-road – has such potential, and about the tweaks that should be made to the plans to make sure it realises that potential.

My response to the Wick Road scheme

This post asks anyone who cares about cycling in Hackney to please respond in support of this scheme. With a few images to highlight what a difference what I’ve called ‘Wick Road plus’ (plus tweaks) would make for local people.

I realised I forgot to mention previously a good point raised by Natalie, that reducing motor traffic on Barnabas Road – a key cycle route link but now busy with drivers cutting through between Homerton High Street and Wick Road – should be part of the scheme. You can see why below. (The obvious way to do this would be to modally filter it.)

So this is the broader East Hackney area now. With road segments categorised up to the borough border, showing roads in three categories: under 2,000 motor vehicles per day (green), 2,000-5,000 mvpd (orange), and over 5,000 mvpd (red). The motor vehicle estimates are taken from an Imperial College traffic model from 2014. Parts will be a little out of date, but it’s broadly accurate I think. I’ve then added in protected/off-highway routes, also coloured green (e.g. cycle paths through parks). 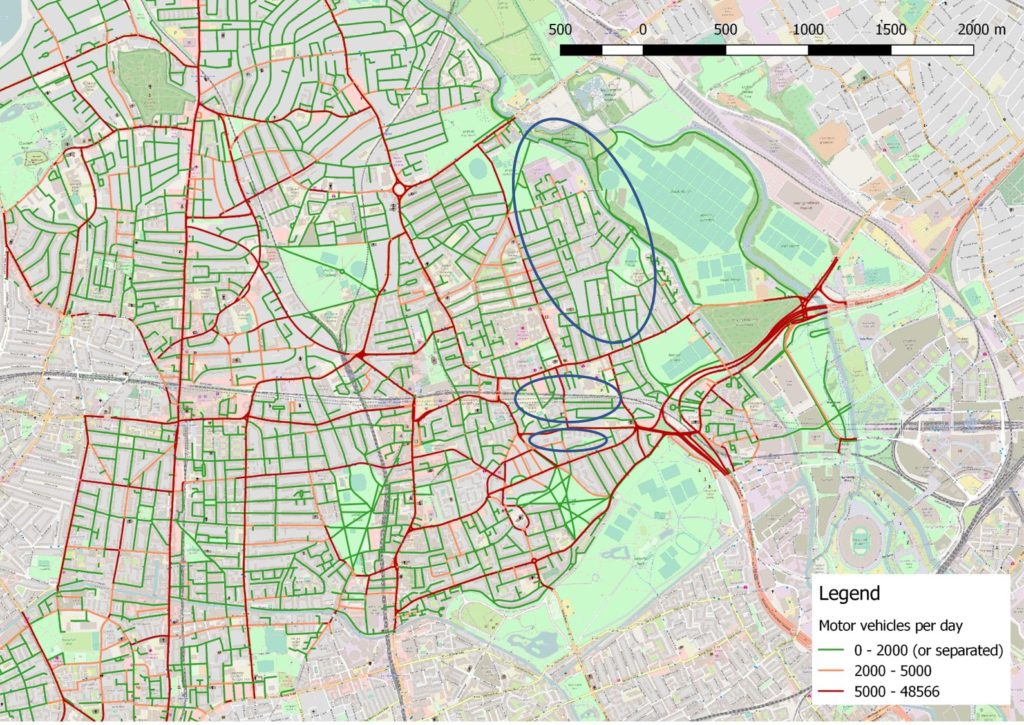 The green sections are hopefully mostly suitable for all-ability cycling. Orange and red ones would both need motor traffic reduction or physical separation of cyclists, while red ones are also likely to be major barriers at intersections (so if a red section crosses a green section, that’s the green section effectively broken, unless there’s a safe crossing).

I’ve highlighted three areas in blue, for comparison. Each roughly illustrates how far you can go without having to cross a red section, or travel on any section that isn’t green. Like an Area Porosity Analysis (to which this is related) it highlights just how boxed in many people are, even in Hackney.

The top oval is my own area – arguably it even extends further West. By comparison, the two bottom neighbourhoods are just above and just below the Wick Road scheme. You can see that in my area, plenty of people can in theory get to the local shopping streets of Chatsworth Road or Homerton High Street on a bike. (Getting beyond or cycling along those shopping streets is unpleasant – interventions are needed there too – but you can at least get to a shop in the first place).

By contrast, the space that people around Wick Road have before they hit a major barrier or busy road is much smaller, so it’s difficult to get to shopping areas on Chatsworth Road, Homerton High Street, or Well Street by bike. (Wick Road itself has few shops). You can clearly see how those neighbourhoods are disadvantaged compared to my own, and how much harder, more unpleasant and riskier cycling (and walking) is going to be for people. 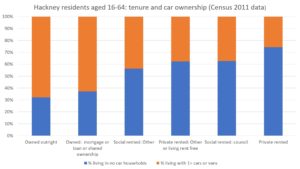 It’s particularly unfair given car ownership around Wick Road is low – according to the 2011 Census, in the 20 Output Areas bordering Wick Road, there’s one car per six people, and 63% of households don’t own a car.  (In Hackney, the chart to the right shows that car owners tend to be the more affluent home-owners, not council tenants on the borough’s large estates.)

Still, that means 37% of households near Wick Road do own a car, which is understandable when you look at the map above, showing just how curtailed active travel is. The image below shows the barrier posed by Cassland Road (top of Bradstock Road) to people living South of Wick Road, wanting to get to the green space of Well Street Common and beyond it Victoria Park.

Shamefully, this is a recommended cycle crossing (there’s a contraflow just beyond Cassland). I use it but I hate it – with two lanes of busy motor traffic, often both speeding and speeding up, it’s hard to judge when you can cross safely even as a confident adult.

Given the conditions here for cycling and walking, it’s not surprising if people aspire to own a car. That crossing says: if you are a local resident, your safety matters less than the speed and convenience of those using your local roads as a drive-through. And yet, the draft Mayor’s Transport Strategy aspires to an absolute reduction in car use and car ownership, despite projected growth in population. 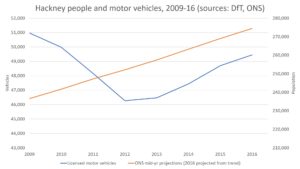 Population vs. motor vehicles in Hackney

How’s Hackney doing? Not that great, it seems – at least since 2012. From that point, the number of motor vehicles registered in Hackney has tracked population. If something doesn’t change, there will inevitably be more driving, and more car ownership in Hackney, just through more people living here.

So Hackney Council needs to entice car users to walk and cycle – and given the huge potential for cycling to grow, and its greater range, transforming conditions for cycling will be crucial in stemming the growth of car ownership and use. (Car ownership being, unsurprisingly, a rather important determinant of car use).

What difference will the Wick Road scheme make to cycle connectivity for those in the borough? I’ve illustrated below what difference I’ve called ‘Wick Road plus’ (Wick Road with cycling tweaks) will make. In terms of connectivity, these minimal tweaks include, as per previous post:

The image shows just how transformational it would be for people living in the Wick Road area. It opens up the Homerton South area, enabling access to shops on Well Street and Homerton High Street (just as people in my neighbourhood can currently access their local shops). The arrow pointing West highlights the potential for people being able then to access East-West cycling links, and shops on Mare Street/Narroway.

The Brookfield Road link further allows people access to Victoria Park, a gateway to green space up the Lea and East to the Olympic Park. It’s also – during daylight – a useful commuter connection South to Cycle Superhighway 2.

Please support this scheme, while asking Hackney to ensure the junctions along it and at either end offer protection and the route is truly 8-80.

One Response to Wick Road #3 – please support this scheme