Westminster Council’s draft cycling strategy has come in for some criticism, which I’m not going to reiterate here, although I’d agree with many of the points made. Instead, I wanted to think about the strategy in relation to the Piccadilly Two Way Part Two scheme (P2W2). Last week I and other cyclists/cycling representatives met with representatives of Westminster Council and West One, to discuss P2W2, which has come in for some criticism from me and others. It’s positive that the Council have promised to think about our comments – let’s see what happens next. In the meantime, I thought it was worth putting down some thoughts on what I think are the priorities here for cycling, and how a redrafted cycling strategy could help get meaningful and speedy change for cycling in Westminster. 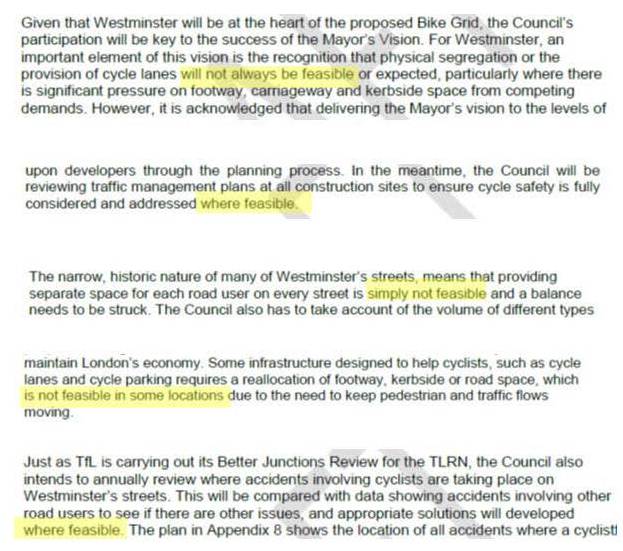 I’d agree with Cyclists in the City that to make Westminster a national leader for cycling (the strategy’s aspiration) substantial change is needed on the ground – in a sentence, easy passage through city streets, with protected routes for cycling on main roads, and lowering the volume and speeds of motor traffic where cyclists must share space. This is in line with the London Cycling Campaign’s Go Dutch principles to which Boris Johnson signed up, and with what we know about why people don’t cycle, and what they like when they do. People – and particularly those groups currently under-represented among London cyclists (like older people) – don’t want to fight their way through congested, polluted streets where motor traffic is either speeding past you at 35mph or entirely blocking your path. Unfortunately, that’s what a lot of Westminster streets look like, with the added bonus of confusing one-way systems which generally don’t exempt cyclists.

For me perhaps the key omission in the document is a clear statement of what people who cycle need/want/require. (Including, of course, those who’d like to cycle but currently find road conditions too scary/difficult/unpleasant etc.) We are still in the realm of promotion, where cycling has multiple benefits but makes little in the way of concrete demands on the transport system. (Perfect – like a cream cake diet that doesn’t make you fat… and about as feasible). Rather, what ‘benefits’ cyclists is defined negatively, what is left over when other needs/desires/requirements have been met. You can see this in the language. On page 22, ‘it is imperative that congestion is minimised’, ‘the need to keep pedestrian and traffic flows moving’; page 25, ‘recognising the needs of other road users and avoiding changes that place unacceptable additional pressure on the road network and kerbside’; page 30, ‘significant pressure on footway, carriageway and kerbside space from competing demands’ and page 32 ‘reviewing traffic management plans at all construction sites to ensure cycle safety is fully considered and addressed where feasible.’

As we used to say in Critical Discourse Analysis 101, this tells us something about power relations. Other road users’ (read, primarily motorists, who take up most street space with moving and parked motor vehicles) needs are seen as shaping what can be provided for cycling. Their demands are ‘imperative’, leading to ‘significant pressure’ on the network which if ignored would be ‘unacceptable’; they must be ‘kept moving’ at all costs.

Cyclists’ needs are notably absent from the document: what kinds of cycling environments current and potential cyclists need, demand, want, is currently not there. Instead we have a rare reference to what cyclists need on page 34:

Cyclists also need to be aware that pedestrians and motorists will not always be aware of or anticipating their presence, and that they need to play their part in ensuring that they are well seen and heard.

(This is of course a duty on cyclists, not a reference to their needs).

In alliance with a clear vision of what’s needed to mainstream cycling, a cycling strategy can help enormously by ensuring this is built into other schemes, and quickly. This is particularly relevant in London, where there’s still plenty of money for property development, transport and streetscape schemes. As in New York, schemes that are not particularly targeted at cycling can be used to dramatically improve cycling infrastructure, by making sure that when roads are dug up cyclists always get something too. And hence back to P2W2. Such developments will be covered by Action A7, on page 32 of the cycling strategy, which states:

Action A7 – The needs of cyclists continue to be taken into account in the design of all transport and public realm schemes. Features that benefit cyclists, such as Advanced Stop Lines and feeder lanes, will be integrated where feasible.

The implication from this action is (a) that what is currently happening is good enough, (b) that what cyclists want is ASLs and feeder lanes and (c) that cyclists only need to be catered for ‘when feasible’. Hence, what’s happening in P2W2 is just that – despite £8 million of work (and despite the removal of carriageway space) all cyclists are being offered is paint on multi-lane roads: no protected infrastructure, no planned permeability improvements. I think they should be doing both and I wish Action A7 instead read something like this:

Action A7 – The needs of cyclists will be taken into account in the design of all transport and public realm schemes. This will include the use of protected cycle infrastructure on main borough roads and cycle permeability throughout.

I.e., not claiming that things are working well now, and giving clear examples of (better) things that can be done, without condition. Only words, but sending a clear signal.

The Piccadilly Two way plans can be seen here, and Cyclists’ in the City’s critique here. In a nutshell, carriageway space (including a bus lane) and some car parking space is being removed on Lower Regent St, Waterloo Place, and Haymarket; the ‘cycling elements’ of the scheme are currently cycle parking, ASLs and some feeder lanes.

Neither Lower Regent street nor Haymarket form part of the (uncompleted) London Cycle Network, but despite high motor vehicle volumes both feature on my copy of Local Cycling Guide 14 as ‘quiet routes recommended by cyclists’. Unfortunately both are far from quiet, having enough cars and taxis to trigger protected space for cycling under UK and Dutch guidelines (before considering buses and HGVs). On the other hand, Jermyn Street, which crosses both and is genuinely fairly quiet, is one-way Eastbound part of its length and one-way Westbound for the other part.

Both the Mayor’s Vision for Cycling, and Westminster Council’s draft Cycling Strategy, stress the need to broaden the appeal of cycling, to make it more ‘safe and inviting’ as the LCC’s Love London, Go Dutch campaign puts it. I’ve filled in a short assessment matrix based on the LCC’s Love London, Go Dutch criteria, to give an initial indication of what’s wrong with the current plans, from this perspective. Have a look at it here (more information about the LLGD matrix as a tool here).

What would it take to make the Lower Regent Street/Haymarket area safe and inviting for cycling? What would the Dutch do?

Clearly, the Dutch wouldn’t expect cyclists to share space with motor traffic on Lower Regent Street and Haymarket themselves, nor on the other major roads in this area. They would install segregated tracks, with no reduction in priority, along such roads. The side streets by contrast could look like the narrow streets of Amsterdam. Where necessary, they would be modally filtered to reduce rat-running motor traffic; reversing one-ways can also help achieve this, as can pedestrianised stretches. Here we see evidence of the latter two strategies. What’s missing are the two crucial components: (a) cyclists being exempt from one-way prohibitions, such as Jermyn Street, and (b) considerate cycling being allowed through pedestrianised sections, such as Glasshouse Street (just North of where Regent Street hits Piccadilly).

So, the ideal would be to have tracks both on Lower Regent Street and Haymarket. Without this, neither can really be counted as cycle-able, ASLs or no ASLs. However, given the needs of pedestrians and bus users, I can see that tracks on only one of the two might be acceptable, given excellent additional measures to facilitate cycle permeability and priority. My choice would be Lower Regent St/Waterloo Place for the tracks, as there’s less kerbside pressure there and a bidirectional East-side track could, given additional connections E-W and N-S, be really useful.

There are steps down to The Mall at the bottom of Waterloo Place, which form a barrier to Southbound continuation, particularly for disabled or encumbered cyclists. However, plans to install a hydraulic lift here would make the N-S axis here (which links to Horse Guards Roads, on the London Cycle Network and leading to the Department for Transport!) crucial for joined-up cycling. Putting tracks in would be a forward-looking step. In the meantime, how about a temporary bicycle channel on the steps to increase accessibility and permeability, and generally make things nicer and easier for cyclists while we wait for the lift.

Northbound, initial quick changes could include allowing cyclists into the Piccadilly bus lane, and facilitating cycling through the pedestrianised stretch of Glasshouse Street. Longer-term, more fundamental changes need to be made, but given the current investment, it makes sense to use it to do what we can for cycling, as an interim measure.

1. Two-way protected cycle track on Lower Regent St and Waterloo Place, without loss of priority. Essential start in making main roads here cycle-friendly. This is a wide direct road with potential for excellent connections over the Mall. Ideally, protected tracks would also be provided in Haymarket; but see point (3) below.
2. Two-way cycling the whole length of Jermyn Street. Very important for allowing cyclists to avoid Piccadilly, a busy main road without protected cycling infrastructure. Similar measures have been successful in the City, Camden, Islington, Hackney etc… (not to mention The Netherlands, Germany, Belgium…) Cyclists using contraflows are immediately visible to motor traffic coming the other way; it’s proved to be a safe solution.
3. If protected lanes are not being provided in Haymarket, then two-way cycling in Wardour and Whitcomb Street must be implemented as an alternative N-S axis. This is desirable anyway as it would provide an unbroken link right up to North of Oxford Street.
4. East-west two-way cycling on Charles II Street.
5. Two-way cycling in Norris Street, Panton St and St Alban’s Street – and to allow bikes to cross Haymarket in both directions between Norris St and Panton Street (currently blocked by a traffic island), creating a 2-way route that avoids Piccadilly Circus.
6. Cyclists to be allowed to use Piccadilly bus lane.
7. Considerate cycling to be allowed through Glasshouse St.
8. Cycle lanes in St James Street, which is wide and not that quiet.

As they stand, the Piccadilly Two Way Part Two plans offer none of this for cyclists. In the future, two-way cycling on one-way streets, cycling in pedestrianised areas, and safe, fast cycle tracks on main roads should be the default when changes are being made. Motor vehicle use in Central London, including Haymarket and Lower Regent Street, is on the decline. Will Westminster, and other boroughs, seize the opportunity to make a step change for cycling, rather than tweaking ASLs and advisory lanes? The future of the Central London Bike Grid – and, I’d say, building a mass cycling culture in London – depends on it.

3 Responses to Westminster: strategies for change