Please read this post and respond to the Aldgate consultation

Currently, Aldgate High Street (or rather, Gyratory) is a horrible, hostile place for walking and cycling. The Google map below shows the motor-centric design, albeit uncharacteristically empty of motor traffic (maybe a Sunday?)

The first time I encountered the Aldgate Gyratory and tried to cross it, I felt like I’d stumbled across a relic of the motorway era. I was confronted by multiple lanes of growling motor traffic, air thick with fumes, a mind-bogglingly complex subway system (in which I got lost, emerging where I started), and no way to easily and safely take a direct route across. So the plans to redesign the area and remove much of the gyratory are welcome, especially the new public space which will open up a North-South pedestrian and cycle route. Here’s a visualisation produced by the City of London of how that could look (looking East down Aldgate High Street):

Courtesy City of London, via http://www.cityoflondon.gov.uk/services/transport-and-streets/transport-planning/transport-projects/aldgate-area/Pages/Changes-to-the-public-realm.aspx

The pedestrian plaza to the left of this picture does indeed look great, and creates a safe and pleasant through route for cycling and walking. But the problem is the roads: the ‘highway changes’ plan by contrast falls way short. If riding the current gyratory feels like cycling in the 1960s (when cycling was in freefall and motor traffic multiplying), riding the proposed highway layout will feel at best like cycling in the 2000s, far from the step change we’ve been promised.

Let’s remember that Aldgate High Street – the road running towards you on the public realm visualisation – (a) is a busy road with 500 HGVs per day and (b) leads in the other direction to Cycle Superhighway Two. This is the route which – if improved – has the potential to become a major cycle commuting corridor, carrying thousands of cyclists at peak hour. The area links Central and Inner London, where we have seen cycling rising and motor traffic falling for many years. Despite broader rises in cycling locally, cycling rates on Aldgate High Street have remained static for twelve years, indicating the suppressed demand along this corridor. There is a clear case to ensure the cycling environment here is as good as we can make it – to full Go Dutch standards. Everything indicates that ‘build it and they will come’ can work at Aldgate.

However, this is what the plans for the highway changes actually look like…

Courtesy City of London, via http://www.cityoflondon.gov.uk/services/transport-and-streets/transport-planning/transport-projects/aldgate-area/Pages/changes-to-the-highway-and-traffic.aspx

Rather than Going Dutch, the Aldgate highway plans repeat many of the mistakes that have already been made for cycling in London. Here’s why I think this isn’t satisfactory. The London Cycling Campaign’s Love London, Go Dutch Matrix highlights two crucial criteria for calm junctions. Firstly, the left hook risk must be eliminated. This is the classic pattern of many cycle collisions in London, and there’s no excuse to build new major junctions where this still happens. Secondly, cyclists should not come into conflict with motor traffic when they wish to make a right turn; a hazardous and intimidating manoeuvre, especially when it means crossing two or three lanes. These two criteria are in my view crucial to building acceptably safe junctions. It’s welcome that Transport for London has requested changes to DfT regulations that will make designing excellent Dutch-style junctions easier, like low-level cycle traffic lights. But in the meantime, we can still create junctions that are much safer for cycling than the UK has traditionally built.

Other important Go Dutch safety criteria relate to the degree of protection afforded people on bicycles making other kinds of junction movements. Having to ride straight on as part of a stream of fast or busy motor traffic (particularly with multiple lanes and/or parking soon after the junction) affords little margin for error. This should be designed out of junctions too, especially when a junction forms part of a key cycle commuting route alignment. The Dutch approach of sustainable safety holds that errors (whoever makes them) should not lead to a vulnerable road user being killed or seriously injured. This seems a particularly good principle for junction design, given the high proportion of injuries that currently occur in these locations.

Clearly, safety criteria are only part of providing a good cycling environment. Much of the rest of the LCC’s Love London, Go Dutch matrix rightly deals with other issues such as priority and fast passage, also important for creating a culture of mass cycling. But junction safety is crucial; and when we use ‘Go Dutch’ criteria to judge plans to redesign busy junctions, it becomes clear that the established default position – providing Advanced Stop Lines and intermittent, unprotected cycle lanes (as here) – is missing the point (at best). That kind of infrastructure doesn’t design out conflict; on the contrary, it can even aggravate left hook hazards – as we know, feeder lanes can position cyclists in the worst possible place in relation to left turning vehicles.

So how come these designs keep coming back, like Freddy in the Nightmare on Elm Street series? While I’m discussing Aldgate here, because of its timeliness and importance within the route network, there are many old school designs appearing all the time, alongside some good ones (including the good work City of London has done creating so many cycle contraflows elsewhere in the borough). As a researcher, why this happens is of great interest to me. It seems puzzling: many engineers, planners, policy-makers and designers really want to do good things for cycling, and increasingly it’s acknowledged we need Dutch-quality designs to minimise risk and create a mass cycling culture. So why do we keep seeing the same old plans, the same old problems? Is it cultural inertia? Organisational systems that haven’t changed? What contribution are modelling methods making? Is cycling policy still stymied by a continuing imperative to maintain motor traffic capacity? – even though traffic levels have fallen, and getting people onto buses and bikes can vastly increase people carrying capacity.

With my advocacy hat on, though, I’m less bothered to unpick all the different reasons for stasis. I wonder instead: how can the problems these designs pose for cycling be more clearly and effectively spelled out? How can the potential deaths and injuries of people cycling, as well as the many people deterred from cycling, be made more visible within a process which so often marginalises them? A process that calculates ‘stacking’ of motor vehicles, and delays to drivers, and writes them large in diagrams and in apparently unchallengeable numbers (which yet, as we know from national traffic forecasts, may well prove unfounded…). 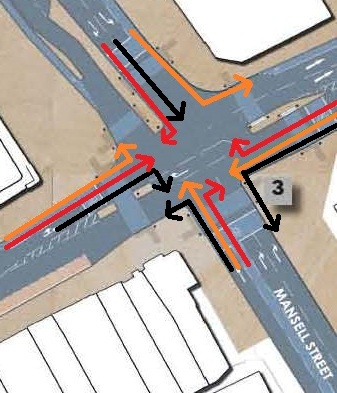 So here’s a contribution to visually representing what’s wrong with the Aldgate plans. I believe that a related system, based on a Level of Service assessment, is being tested for use in the London Cycle Design Standards. This version uses criteria from the LCC’s Love London, Go Dutch Matrix. It shows all potential cycle movements at just one of the junctions; and remember, the East-West route is a continuation of the Cycle Superhighway Two alignment, not just any old road. I’ve used five of the criteria from the Love London, Go Dutch Matrix to explore this one junction (NB: there are also problematic issues elsewhere, like the 1m cycle lane alongside an HGV loading bay, highlighted by Danny Williams of Cyclists in the City).

The analysis (click here for the full Aldgate analysis) shows that of the twelve possible cycle movements at this junction, eight fail the Go Dutch criteria, with four marked up as particularly critical (left hook hazards / right turns across motor traffic lanes). The other four movements are banned. This is a junction design that builds in unacceptable risks for any cyclist unfortunate enough to have to use it. I would acknowledge that it’s an improvement on what currently exists – what wouldn’t be? But substantial risks remain, and we owe it to future cyclists (and people who won’t be able to cycle in these places, unless we achieve change) to speak out against this. Please respond to the Aldgate consultation and to other consultations (either to criticise or to praise, where they get it right), and please tell your councillors and your MPs that less atrocious isn’t good enough any more.