Review of ‘Promoting Walking and Cycling’ 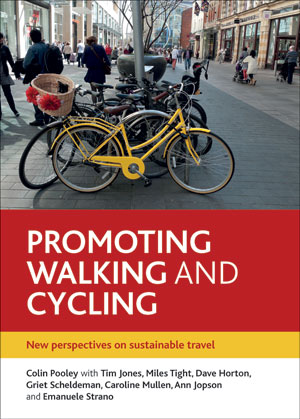 Hearing Colin and others on Kevin Fong’s Radio 4 programme on cycling this week reminded me to put this in press book review online. Because of workload pressures I usually try and avoid doing book reviews but I thought I’d make an exception for this one. I’ll be organising an event in June as part of a visiting fellowship at CeMoRe in Lancaster, to further discuss some of these issues.

The is the book of the EPSRC-funded Understanding Walking and Cycling (UWAC) project. UWAC (2008-11) helped shift debate in UK cycle advocacy circles, when its 2011 project report argued policy-makers should not base policies about walking and cycling ‘on the views of existing committed cyclists and pedestrians’. While this proved uncontroversial for walking, some cycling advocates vehemently criticised this approach, even when adjusted to ‘not only on the views…’
The debate was not just about the views of individual people who cycle and walk. It tapped into a fault line within UK cycling advocacy. Should cyclists be on the road, “integrated” with motor traffic, as was the dominant assumption for many years? Or, should advocates aim for a Dutch-style approach, separating cycles from motor vehicles, with segregated cycle tracks on main roads and removing through motor traffic from minor roads? Many supporting the former option saw the criticism of “existing committed cyclists” as referring to them. Supporters of Dutch-style infrastructure in established advocacy organisations, and new organisations such as the Cycling Embassy of Great Britain, welcomed the report.

Two years on, Promoting Walking and Cycling appears in a different policy and advocacy landscape, where Dutch-style provision has gained ground in the UK and other countries. An interesting and readable book, it makes a series of radical yet sensible recommendations, from improving walking and cycling infrastructure, to legal and policy changes. Most are fairly uncontroversial within the sustainable transport field; although not, sadly, within the political class. The mixed methods used, from survey research to ethnography, usefully highlight the range of often interconnected barriers to walking and cycling. Although providing safe infrastructure is very important, it is far from the only issue and policies around, for example, school “choice” help make active travel harder.
Yet reading these recommendations, I wondered from where change could come, if existing cyclists and pedestrians have – as the book suggests – mostly learned to live with low expectations. One reasonable criticism levelled by cycle advocates back in 2011 was that if policy-makers did not listen to existing cyclists, they might just ignore cycling altogether, as happened for many decades after World War Two. I felt the book might have usefully reflected more on the changes in cycling advocacy that UWAC helped to influence, including whether there is the potential for new advocacy to lead to policy change. (Some interesting material in this respect is found on the blog written by UWAC researcher Dave Horton, “thinkingaboutcycling“).

My research for the Cycling Cultures project suggested a slightly more hopeful picture. Cycling Cultures found many existing cyclists do want infrastructural improvements. Why this difference? Our empirical research took place slightly later; but probably more importantly, UWAC research was in four cities where cycling had been low for many years. Cycling Cultures research areas had relatively high and/or rising cycling rates; perhaps generating more awareness both of cycling and of the continued problems with local cycling environments. I believe this can potentially provide impetus for policy change.

In relation to the mixed methods used, I felt the book somewhat underplayed the interesting negative findings from the work package examining how the built environment influences active travel. Local connectedness seemed to have little influence on cycling levels, in particular. This seemed to support the team’s focus on cycling infrastructure (rather than broader land-use changes) and I was surprised more was not made of it. I wondered whether the same is true in high-cycling contexts such as The Netherlands. With good cycling infrastructure, does land use come to the fore?

Finally, I’d have liked to see tensions in the “walking and cycling” interface explored to a greater extent. The book highlights “walking and cycling” are not the same thing and hostility to cyclists is sometimes expressed from a “pedestrian perspective”. How best to deal with this conflict while attempting to improve conditions for both cycling and walking? Current debates around providing for buses, pedestrians, and cycles within urban areas highlight the need to tackle some tricky issues around space allocation and urban design. The conclusion of the book refers approvingly to “shared space” in Exhibition Road, London but this (a) is not a truly “shared” environment for most of its length and (b) remains problematic for cycling, at least.

Overall, I would recommend this book to planners, academics, and others interested in learning more about how the UK (and many other countries) have failed walking and cycling, and how we might start to make things right. To get the full context for the study, I suggest reading it alongside the debates it sparked on the blogosphere back in 2011.

Rachel Aldred, University of Westminster Department of Planning and Transport

This is an Author’s Original Manuscript of an article submitted for consideration in Transport Reviews [copyright Taylor & Francis]; Transport Reviews is available online at http://www.tandfonline.com/toc/ttrv20/current#.UtvAebRFC70.