If you live in Hackney and are a London Cycling Campaign member – please come to the local group’s Annual Meeting next week (Wednesday 5th October) – details here. If you live in Hackney, want to make it better for cycling, but aren’t an LCC member – why not join, and come to the meeting? You can attend as an observer otherwise but won’t be able to vote in the committee elections. And we have an excellent guest speaker: Isabelle Clement of Wheels for Wellbeing – if you’ve assumed disabled people don’t cycle, or cycling is about ‘bicycles’, she’ll change your mind!

Hackney has clearly got some things right. I’ve argued (as have others) that there are basically three ‘gold standard’ types of cycling environment. These are:

These all share one key characteristics – riders have to share with no, or virtually no, motor traffic. This is well established now as being what people say they want from cycling routes, and increasingly there’s more and better quality evidence that if you build it (what they say they want), they come.

Hackney is (in)famous for not having built cycle tracks on main roads (to be fair, hardly anyone in London was building decent cycle tracks until recently).

But what of the other two types of infrastructure?

– Hackney pioneered ‘modal filtering’ from the 1970s, using gates, bollards and planters to cut out through motor traffic in some areas, particularly in the West of the borough
– Cycling is generally permitted through Hackney parks; and along the borough’s canal (Regents’ Canal, running East-West) and river (Lea, running North-South) 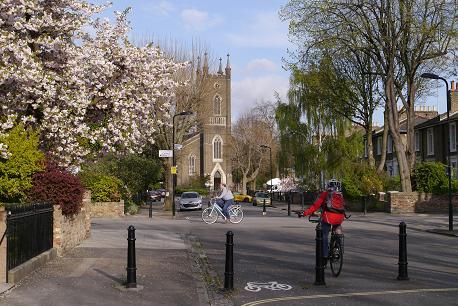 Hackney modal filter, de Beauvoir (on my route to work).

Both these, I’d argue, substantially improve Hackney’s cycling environment compared to much of London (many London boroughs don’t generally permit cycling throughout parks and many have done little modal filtering). Although hostile main roads and gaps in routes remain, as elsewhere.

Like many others, my cycle commute goes from Hackney to Central London, and takes in a park (London Fields) and quiet residential streets (e.g. De Beauvoir Square). Some streets are not so good, and no doubt put off less ‘hardened’ riders than myself – but a reasonable chunk of my journey’s in places where I don’t have to constantly be on the lookout for cars, lorries and buses. This mix generally continues as I ride through Islington and Camden, before I enter the motor-dominated free-for-all that is the London Cycle Network in City of Westminster.

Which brings up another issue. Hackney can be proud of its rise in cycle commuting. And Islington and Camden (which have also created some ‘gold standard’ type routes) have played a part too. When you look at where people ride, two things stand out (NB using Middle Layer Super Output Areas as the geographical units, not electoral wards): 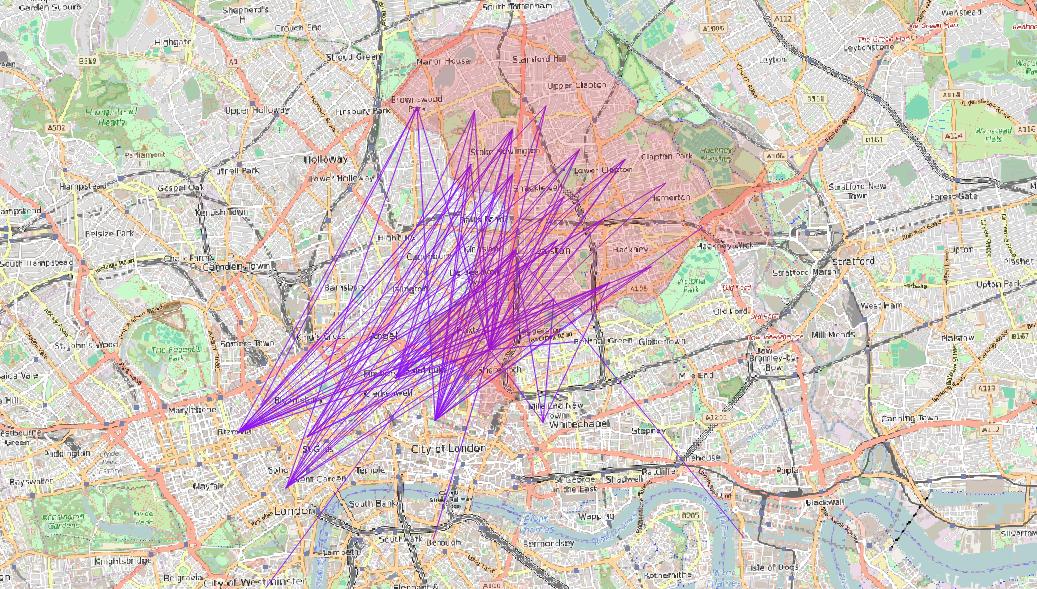 (i) there’s relatively little cycle commuting from the North and East of the borough – areas like Stamford Hill, Finsbury Park, and Homerton/Hackney Wick (where major roads are hard to cycle along or cross, from urban motorways like Seven Sisters Road to Mare Street and Wick/Cassland Rd, and where there’s little modal filtering)
(ii) Hackney’s cycle commuters don’t just ride in Hackney – for much, maybe even most of their journey, they’ll be riding in other boroughs. This means Camden and Islington, and City of London – by contrast there’s little in the way of cycling to employment hubs in Newham (Stratford) and Tower Hamlets (Canary Wharf). This might tell us something about comparative provision for cycling in those boroughs. Many Hackney cycle commuters will use Camden’s Tavistock Place cycle tracks.

Hackney’s clearly made progress, but this is concentrated in the Centre-West of the borough. I believe that Hackney’s ambitious targets will require it to take that step beyond. The Hackney success story encouraged in some a belief that protected space was not necessary, because Hackney has achieved impressive growth without it (with 2/3 of the ‘gold standard’ infrastructure types, more than you get in many places). But I think Hackney is now hitting the limits of this growth. If we don’t sort out some of the major roads that are particularly suppressing cycling from the North and East of the borough (and deal with some of the minor roads there that should be quieter), we will struggle to meet Hackney’s targets.

Which are ambitious. The Hackney Transport Strategy has the following targets for all journeys and cycle to work:

Hackney Cycling Targets (all trips and cycle to work only)

A Hackney with all-trip mode share of 15% (and, incidentally, 15% of secondary school trips by bike, up from 1.5%!) would be a Hackney transformed (again). Worryingly though, the past few years haven’t seen much change. The Active People Survey records cycling rates year-on-year: in Hackney the proportion who cycle once a month or more was 25.9% in 2010/11 and 25.2% in 2014/15 (that won’t be a statistically significant fall, but it’s worrying to have no change in a cycling indicator over 4 years, when your 15-year targets involve growing cycling by 65%, 100% or more).

Where will all these extra trips come from? Luckily the PCT, which I used for the first chart, can help with that. There’s more about the PCT on its website, but basically, I have used the ‘Go Dutch’ scenario to look at cycling potential. ‘Go Dutch’ uses Dutch propensities to cycle – i.e. assumes Hackney people are as likely as the Dutch to cycle commute trips of a given length and hilliness. 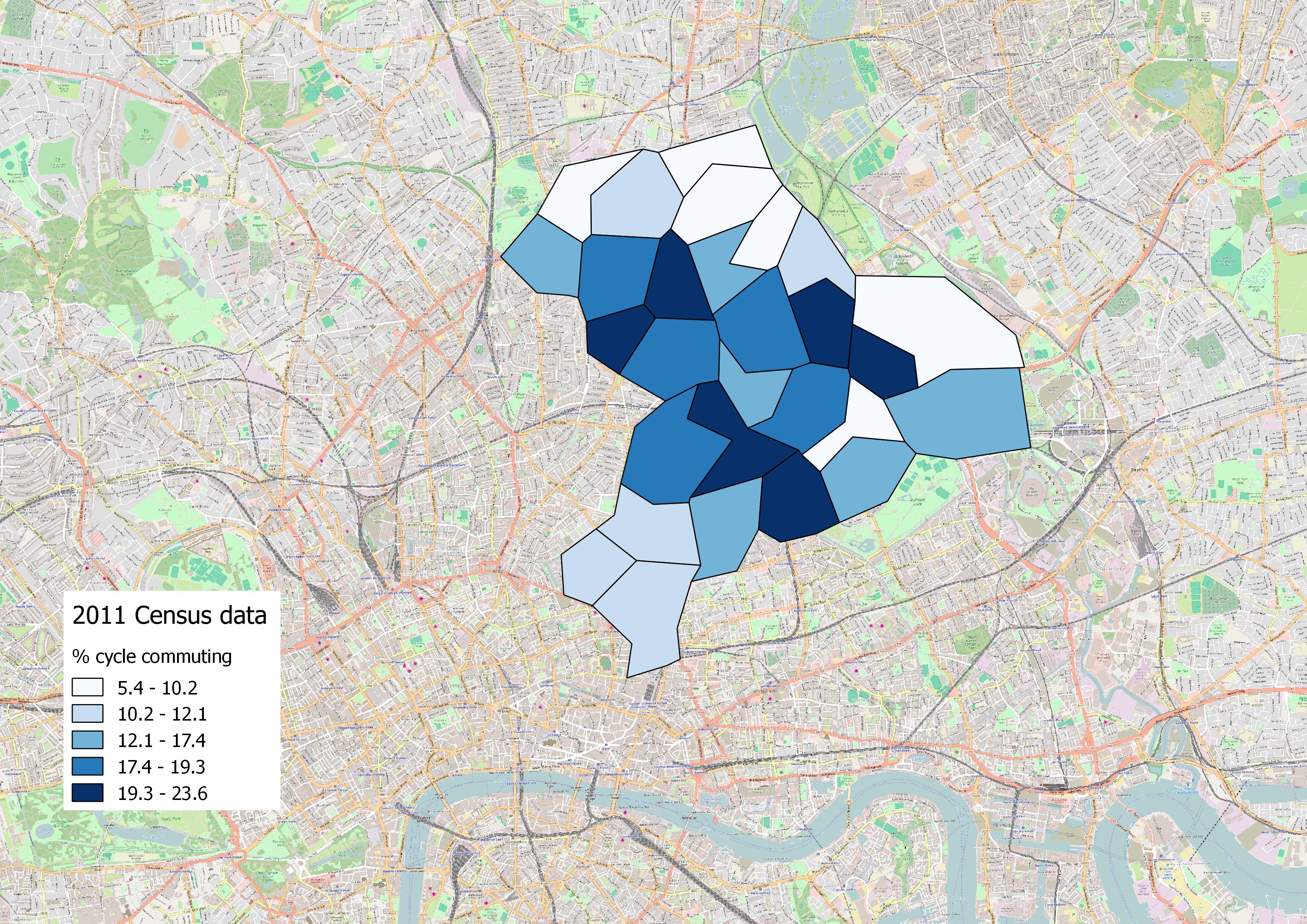 Across the borough, Hackney’s ‘Go Dutch’ commuter cycling potential is 30.8% – around double the current rates, and almost the same figure as the 2031 target the borough uses. (The PCT’s more ambitious e-bike scenario gives a figure of 37.1%). So the PCT (with caveats I’m happy to explain) can help Hackney think about where those increases in cycling might come from, in terms of commutes – with implications for prioritisation of ‘gold standard’ routes.

The map above illustrates on an area level where cycling to work is currently concentrated – as the first ‘desire line’ map suggested, the North and East of the borough are lagging behind, while the centre-West has relatively high cycling. 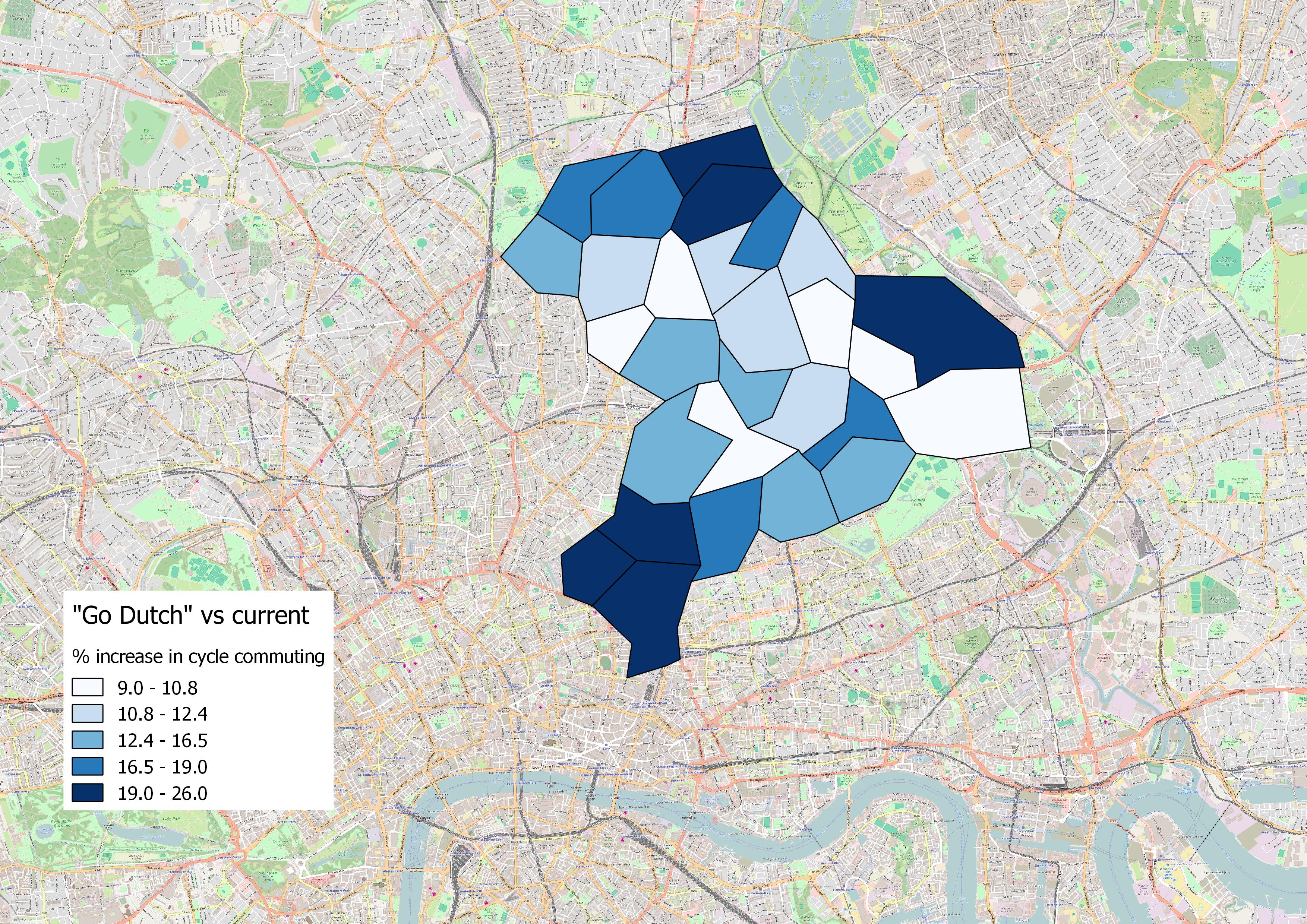 Next is a map indicating where we’d see the biggest increases, if we achieved the “Go Dutch” scenario. Across the borough as a whole cycling rates would double (i.e. go up by 15 percentage points), but some neighbourhoods would need particularly large growth to fulfil their potential (based remember on the proportion of shorter and flatter trips, which are more conducive to cycling). The biggest growth will need to be in the North and East, as well as in the South-West corner.

When we look at the desire lines with 25+ commuter cyclists under “Go Dutch”, this also highlights the need for cycling growth to spread out more across the borough. There are more trips now in and within the North of the borough, as well as more trips between the East of the borough and Central London (or even South of the river). 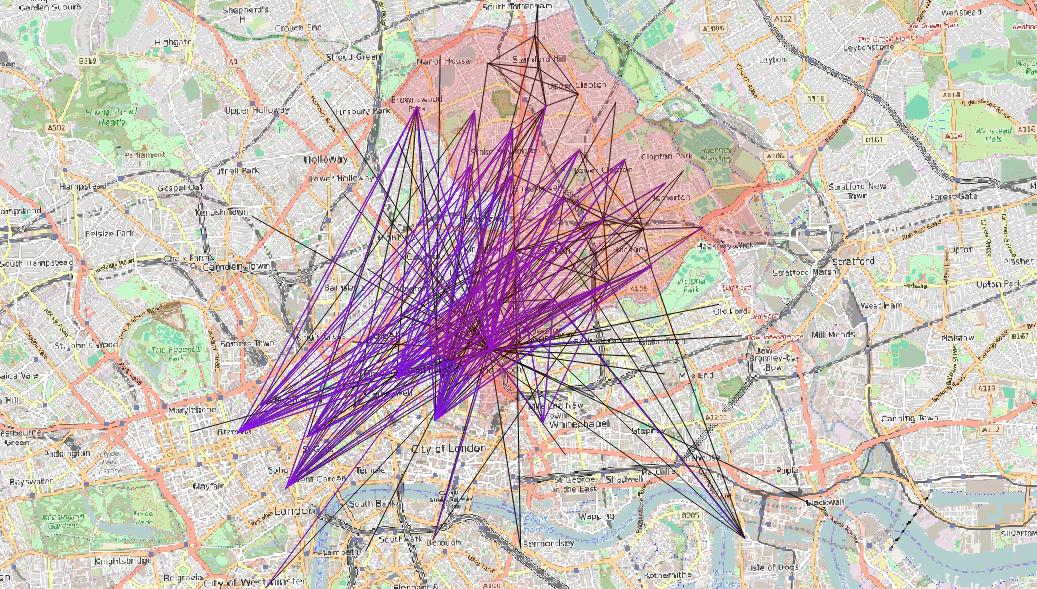 The PCT’s only for commuter cycling, so clearly it’s only part of the picture. But it does highlight the need for the new Mayor and Cabinet to tackle the barriers stopping people cycling in the North and East of the borough, if we’re to break out of four years’ stagnation and hit those ambitious 15-year targets.

‘I’ve been involved in the early stages of the scheme at Seven Sisters Road, where clearly we are narrowing the road, we are looking at a scheme afresh and we’re trying to get rid of the 1950s style motorways through our urban environment. So I think in a place like that absolutely we should be looking at protected segregation. I think there’s other places in the borough around the Wick where that type of infrastructure would be very easy to deliver.’

This and some of the language in Hackney’s Transport Strategy, such as reference to ‘the provision of clear safe space in the form of segregated cycle lanes’, suggests that protected space on main roads is on the agenda. Phil and key members of his team have said that there is now no ideological opposition to protected space for cycling. The time to make the case for this – at Seven Sisters Road, in the Wick and elsewhere – is now.

This is an appeal to everyone in Hackney who wants to see protected space for cycling: please join Hackney Cycling Campaign in pushing for this, as despite the goodwill it won’t happen unless there is an active campaign clearly lobbying for it. So here’s those meeting details again. I hope to see you there.

One Response to Moving Forward in Hackney