At London’s Space for Cycling ride on the 17th May, Andrew Gilligan said something that sounded rather ominous: “We shall see if the forces supporting cycling are greater than the forces opposing cycling.”

Even in Cambridgeshire, where Cambridge City boasts the UK’s highest rates of cycling (58% of residents cycle once a month or more), the forces opposing cycling remain strong. Councillors on the County Council’s Economy and Environment Committee just voted to defer decision on the Hills Road and Huntingdon Road plans, which won Cycle City Ambition funding. At the least the schemes are going to be delayed and at worst, there’s a risk of losing the funding and/or further diluting the plans until they become meaningless.

Like others, I didn’t think the plans were perfect. I did see them as a step forward, with the clear intention to separate cycle traffic from motor traffic and from pedestrians, on these busy main roads. I wrote:

“the plans – however imperfect – are a clear sign that universal design is slowly gaining ground in the UK cities that are leading on cycling, but improving junction design remains a priority.” 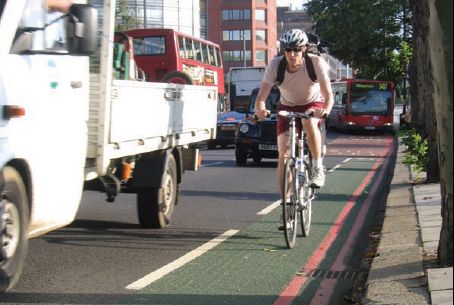 Dear Continental visitors: yes, this really is the cover of our cycle design manual.

In blocking the schemes, some on the Committee raised safety fears. But not those safety issues (lack of segregation through junctions, for example) which would mean that – despite the improvements – cyclists and pedestrians still face unnecessary risk from motor vehicles. No. The safety fears raised by the Committee related to ‘kamikaze’ cyclists and the threats they pose to pedestrians.

The language may be offensive, but the sentiment’s not entirely their fault. LTN 2/08, our Cycle Infrastructure Design manual, is an international joke. Not only is much of the content useless, the images continue to hold sway over the public mind. Look at this cyclist. You wouldn’t want him zooming behind you when you’re getting off the bus, would you? He belongs on the road. Look at him! He’s got a helmet on. He’ll be fine. (Sadly, some of the Hills/Huntingdon Road illustrations do have more in common with Mr. C.I.D. than with the diverse group of people who cycle in Cambridge.) 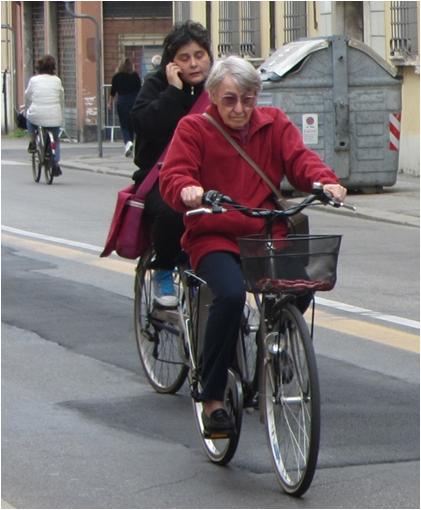 On the other hand, how do you feel telling her she should mix with buses and HGVs?

The Committee will meet again on 8th July. If you live or work in Cambridgeshire, please, write to your councillor, and/or to the members of the Economy and Environment Committee, expressing your concern over this threat to the proposals. One reason why the Councillors on the Committee voted the way they did was that they received a number of emails opposing the proposals. Here are some thoughts on what you might say (there are some references at the foot of the page related to the evidence on infrastructural preferences etc.):

1. There is now a pretty strong academic consensus that we have to separate cycles from heavy or fast moving motor traffic, if cycling is to be inclusive and safe. This is also generally acknowledged by international design guidance.
2. Hills Road and Huntingdon Road are both busy main roads: these are not the kind of streets where people on bikes (or indeed on foot) should be expected to share space with motor traffic.
3. Hills Road and Huntingdon Road are direct and quick routes into the centre of Cambridge, and people on bikes and on foot should be able to safely and pleasantly use these routes.
4. Without high-quality separated infrastructure, these routes exclude people from cycling; people either will not be able to cycle, will cycle feeling unsafe and intimidated, or will ride on the pavement. Evidence shows that women, children, older and disabled people are particularly put off, so will be disproportionately excluded.
5. Although the risk of injury is low, pavement cycling annoys pedestrians; particularly disabled and older people. (At the moment, Hills Road actually permits pavement cycling, so the proposed move towards separated cycle lanes there is clearly a gain for pedestrians, particularly the most vulnerable groups).
6. For people to be safe and comfortable on these roads either on bikes or on foot, we clearly need high-quality separated infrastructure as proposed in the plans (preferably kerb segregated, and with caveats about junction improvements being needed). Not surprisingly, the consultation over the plans showed majority support.
7. If people on bikes are being segregated from motor traffic, ‘bus stop bypasses’ (where the cycle lane continues inside the bus stop) are part of that. It makes no sense to protect people and then make them regularly pull out into motor traffic at bus stops. If bypasses really aren’t possible on a particular road, and it is to be made safe for all ability cycling, then motor traffic volumes and speeds will need to be dramatically reduced instead.
8. Bus stop bypasses work elsewhere in Cambridge, in Brighton and in London, and in many other countries. They need to be sensitively designed and monitored, because they’re still relatively new here. Some expressed concerns were being taken into account in Cambridge, with proposals to narrow cycle lanes at bus stops and put in crossings for pedestrians. Possibly more tweaks need to be made – but this isn’t a reason to block the scheme.
9. These proposals represent a substantial increase in safety and comfort for people on bikes, and (given the likely reduction in pavement cycling, especially on Hills Road) an improvement for people on foot. Bicycles will get in the way of buses less, with potential journey time benefits for bus travellers. The proposals will enable more people to cycle, thus encouraging modal shift with resultant benefits for health, environment and congestion.
10. The protection offered by the scheme must not be watered down, or these benefits (already compromised to some extent) will be lost.

One Response to Will Cambridgeshire councillors block space for cycling?