Children and Cycling: headline findings from the first paper

Cross-posted from the Guardian Bike Blog where it appears in edited form here.

Recently the House of Commons added in a requirement for a national ‘cycling and walking investment strategy’ to the Infrastructure Bill. This will mean the Department for Transport setting targets and allocating investment for cycling.

Some good news – although the amount of funding is yet to be determined. But experience in London has shown that even with reasonable funding and political support, getting the infrastructure right remains a challenge. 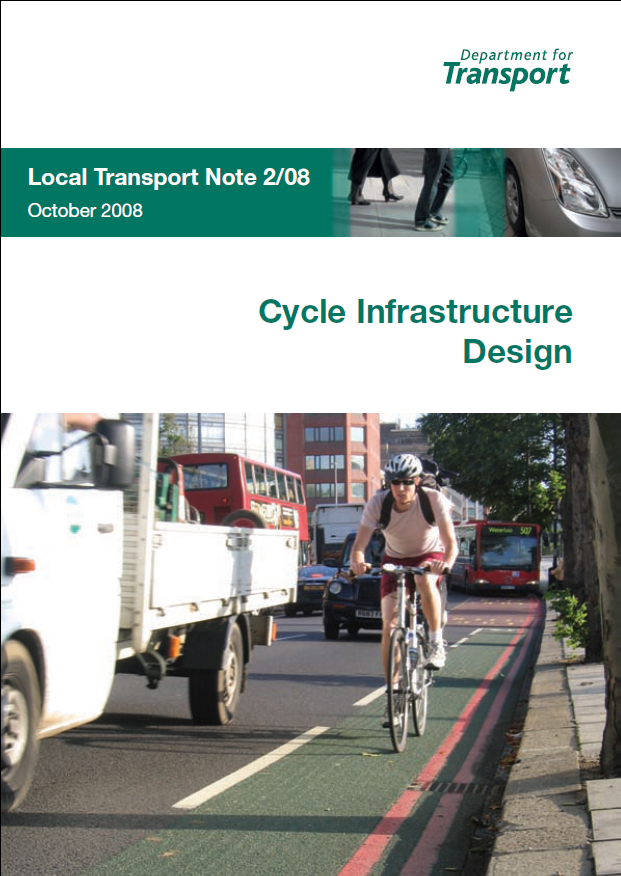 This, the cover of our national cycle design guide, gets a laugh when presented in most other Northern European countries.

We are hobbled by history. Our national cycling design guidelines reflect a failed approach, of designing for cycling as if it were driving or walking. Successful countries design for cycling as cycling, with mode-specific needs related to speed, safety and comfort. And they design for cycling for everyone, from children to grandparents. By contrast, the cover picture on Cycle Infrastructure Design says it all about our target market – sporty, youngish men, who enjoy mixing it with lorries and buses. A pretty small minority.

Even the updated London Cycling Design Standards (LCDS), good in many respects, says relatively little about designing for child cycling. This isn’t just a children’s issue, it’s an equalities issue, as LCDS acknowledges. Women are more likely than men to be travelling with children. So failure to design for children might be one reason why, even where cycling’s increased, we’re seeing little change in gender balance.

There’s also a gap in the research. There’s lots of surveys asking people about cycle infrastructure preferences. But no one has asked about riding with or by children. We assume standards need to be higher than for riding by solo adults, but haven’t explored how high they need to be. Are residential streets generally ok for child cycling? What levels of segregation are needed on busier roads?

Asking about preferences is limited – we also need to look at what happens to child cycling when infrastructure is radically improved. But as we – and other low-cycling countries – are only just getting around to that, there’s not much evidence yet.

So I carried out the first online survey measuring adults’ attitudes towards child cycling, using ten infrastructural examples. Nearly 2,000 people responded to the survey, and a paper on the results has been accepted for publication in the European Journal of Transport and Infrastructure Research, which you can read here.

Even people happy to ride on busy roads themselves are generally not keen to ride there with eight-year-olds. One commented:

‘I will cycle regardless of the conditions, but not with my children unless they are either being carried by me, or they have separated space from motor traffic. I have no confidence that drivers will be careful around my children cycling.’

There was remarkable consistency across genders, ages, and locations, in views about designing for child cycling. People supported substantial separation from motor traffic, in various forms. Separation by kerb or by car parking was very popular, as were park routes and streets closed to through motor traffic.

By contrast, riding with buses, painted cycle lanes, and residential rat runs scored poorly for riding with children, even among many respondents prepared to negotiate these environments alone:

‘I love cycling, and believe myself to be a confident cyclist. However, when I have my child on board, I feel that I have to plan my journey carefully and there are MANY routes that I am happy to ride alone, but simply would not take a child on.’

This doesn’t just affect children’s mobility. It also substantially restricts mobility for fathers and perhaps even more so, mothers. As one commented,

‘If I have another child it saddens me I may have to stop cycling as I won’t be able to transport them both.’

Others said they weren’t willing to ride with children even on back streets, because they feared inconsiderate rat-running drivers. Rural areas were described as particularly difficult, with fast and busy roads blocking even short trips.

What can we take from these findings? Park routes are seen as extremely suitable for children. I believe authorities should, as in the London Borough of Hackney, allow considerate cycling in all parks and green spaces unless there are exceptional compelling reasons against. We need these routes now: even if we invest substantially and well in cycling, it will be some time before most streets are suitable for children.

Secondly, it looks like residential streets in themselves aren’t good enough, if they carry significant amounts of through motor traffic. Closing these to rat-runners, while maintaining motor vehicle access (“modal filtering”), may make a major difference to child-friendliness.

There may be other benefits, as found in recent research by Hart and Parkhurst, where the street that wasn’t a through route for motors was the one where people knew their neighbours and helped out elderly people living on the street.

Other research I’m doing suggests driver behaviour has a substantially negative impact on places that are often assumed to be quiet streets, but used as rat runs. Who wants their child to be at risk of harassment, such as engine revving, tailgating, beeping, verbal abuse or worse, being driven at? Most adults aren’t that keen on it either. So modal filtering could be a key part of creating streets for everyone, where motors can access homes and shops, but don’t dominate.

One survey question involved crossing a busy road. This was widely seen as unsuitable for children. So even where residential streets are quiet enough for child cycling, this may be counteracted by failing to provide protection at junctions. We need to investigate these barriers and have courage to put children before motor traffic flow.

One final recommendation is around methods of segregation. Clearly, paint isn’t good enough; nor is being segregated from cars but mixed with buses. Armadillos – small pieces of plastic delineating a cycle lane – received more mixed feedback and need more study. The most popular forms were those that provided a greater sense of separation: kerbs, and car parking. These should be the default form of provision on busier roads where we segregate rather than filter.

12 Responses to Children and Cycling: headline findings from the first paper